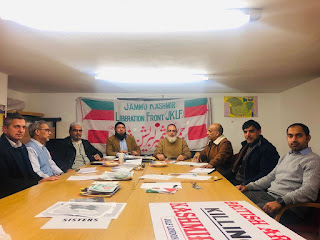 London (23 Jan 2019) : Jammu Kashmir Liberation Front-JKLF London branch has strongly condemned the actions by Azad Kashmir governments for issuing summons to 18 senior leaders of JKLF for protesting and presenting their case of Kashmir.

In a statement issued from London, it said that a resolution was unanimously passed which condemned the summons issued against 18 senior leaders of JKLF in Azad Kashmir. Terming this decision as war against freedom of expression in this part of disputed Kashmir, statement further said that tight controls on freedom of expression have been a hallmark of government policy in Azad Kashmir in recent years and such acts go against articles 18, 19 and 20 of the universal declaration of Human Rights which Pakistani government is a signatory.  JKLF London branch has also extended its full support to President of JKLF in Azad Kashmir, Dr Toqeer Gilani and trusts his decision making to handle this situation. JKLF London branch will also use all tools necessary to highlight this gross injustice making mockery of human rights.

It was also decided in the meeting that JKLF London branch will commemorate the 35th Martyrdom anniversary of its founder Maqbool Butt Shaheed by participating in large numbers in a protest outside Indian High Commission in London. During this meeting, senior leader of JKLF in UK Mahmood Hussain struggle and martyrdom of Maqbool Butt is a glorious chapter of our history that will always guide us through the tough journey of freedom struggle.

11 February is being commemorated as Maqbool Bhat’s martyrdom anniversary. On this day Kashmiris all across the world remember their hero with honour and pride. Maqbool But was hanged by India in Tihar jail on 11 February 1984 and his body was not given to his family for a proper burial.