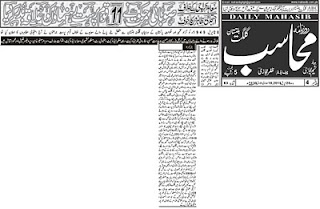 Parwana said that the colonial masters are getting more and more power after the so-called empowerment package introduced in the region. The violation of basic rights of the people has become order of the day. The live example of the lawlessness in the region is to expel the son of soils from their hometowns.

He explained that at least 11 nationalists were throw our by forced for three months from Gilgit-Baltistan in a bid to prevent a public gathering they were planning to hold in the region.

The Gilgit Baltistan Democratic Alliance (GBDA) had planned to hold a public meeting in Garhi Bagh, Gilgit, to condemn the ‘Karachi Agreement’ of , under which the administrative control of Gilgit-Baltistan was handed over to the government of . He Said.

The police raided hotels in Gilgit and took into custody nationalist leaders and activists belonging to AJK, whereas the rest were picked up from their residences in the town. The nationalist’s leader Shafqat Inqalabi was arrested from Gilgit and sent out for three months. He said Manzoor Parwana urged international community to take notice the rights violation in Gilgit Baltistan and used influence to release Shafqat Inqalabi.

JKLF condemned the Baton Charge and Arrest of Students in Muzaffarabad

JKLF condemned the Baton Charge of Students and their arrest in Muzaffarabad, 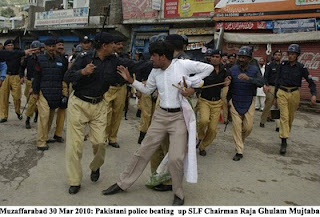 London (April 01, 2010) Jammu Kashmir Liberation Front –JKLF- has strongly condemned the heavy baton charge of Students Liberation Front leadership and their subsequent arrest in Muzaffarabad on Tuesday 30th March 2010, Kashmir at the hands of Pakistan's forces during a peaceful demonstration in Muzaffarabad.
JKSLF top leadership including Chairman Raja Ghulam Mujtaba, Senior JKLF leaders Raja Mazhar Iqbal, Joint Secretary JKLF Zahid Habib Sheikk and others have been severely injured by Pakistani police in Muzaffarabad and subsequently been arrested after they were severely beaten up by Pakistani police during a demonstration in Muzaffarabad. Earlier hundreds of JKSLF activists had gathered in Muzaffarabad on Tuesday morning and the police objected to the holding of peaceful demonstration organised by Students Liberation Front to march towards the Assembly.
In a statement issued from , Head of the JKLF Diplomatic Committee Prof. Zafar Khan and President of JKLF UK Zone Haji Rauf Khan has said that such indiscriminate baton charge on peaceful demonstrations will not weaken the Kashmiri people resolve for an Independent state. They further said that such oppressive and cruel measures will not dampen the struggle for right to self determination and national dignity of Kashmiris.
M. Faiz,
Member,
JKLF Diplomatic Committee
Newer Posts Older Posts
Subscribe to: Posts (Atom)