The Kashmir issue and the Labour Party - Letter to Jeremy Corbyn

In the first instance I would like to take this opportunity to congratulate you on becoming leader of the British Labour Party.

You may not recall but I met you in mid 1990s to seek your support  on the Kashmiri peoples's right to self determination and the peaceful resolution of the Kashmir issue. As I recall Mr Corbyn you  asked me a few probing questions in particular regarding the objectives and ideology of our movement and the nature of reunified and free Jammu Kashmir that we as a liberation movement were seeking to achieve.
In a  meeting that lasted for around 30 minutes  you heard my responses to your questions carefully and with utmost courtesy. You assured me that in principle you would support the Kashmiris's right to self-determination.
We also met  very briefly for the second time when you visited Luton a few years ago where our mutual  friend and your fellow Parliamentarian Mr Kelvin Hopkins MP introduced me to you.
You' ve become  leader of a party whose roots are embedded against exploitation and suffering  of  ordinary people, and a party which was determined to eradicate inequality, exploitation and suffering  for ever.
Your success in becoming the leader of this progressive and people centric political party symbolises  that founding spirit of the Labour Party.
The manner of support within the party to your candidature in my view is the wider reflection of the yearning within the British people for a genuine and realistic change to share the resources of this great country fairly and equitably across society.
I am confident that the momentum and dynamism of the current  spirit in the revitalised Labour Party will  enable  a change of government in 2020 under your leadership.
Mr Corbyn as you are a great supporter of causes against exploitation and oppression at home and abroad,  I am confident that as Leader of the Opposition you and the Labour Party  will not forsake the plight and suffering of 20 million people if Jammu Kashmir and will use every opportunity to seek and support a peaceful, just and a democratic  resolution of the  issue which is the longest unresolved  dispute at the United Nations .And an isdue over which India and Pakistan have fought two full scale wars and continue to confront each other agressive across the Line of Control-LoC- with periodic shootings that result in deaths of Kashmiri civilians as well as soldiers of both countries.
Mr Corbyn as Kashmiris we seek to ensure that Kashmir becomes a bridge of peace rather than a perpetual bone of contention between India and Pakistan.
However  Kashmiris have lost all confidence in the bilateralism of India and Pakistan,   and feel that the  the seemingly intractable situation can only be moved along with the intervention of Britain and other major powers of the world persuading both countries to allow the Kashmiris to decide upon their future status as was recommended by the UNSC  and agreed upon by both India  and Pakistan.
I hope therefore that you, unlike the current British government  and your predecessors in the Labour Party, will feel comfortable in engaging with the South Asian protagonists, in particular with India, that Kashmir primarily is an issue to do with the aspirations and democratic rights of the people of Jammu Kashmir  (usually refered to as Kashmir ), to determine a political  and constitutional status consistent with their inherent and inalienable right of self determination.
As you are a man of the people and as such more accessible, may I take this opportunity to request for a short meeting  with members of the Diplomatic Bureau  to further elaborate on the very brief thoughts that I have had the opportunity to explain, in what is essentially, a Letter to congratulate you on becoming Leader of the Labour Party.
With regards
Prof Zafar Khan
(Chair ) 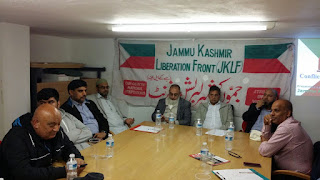 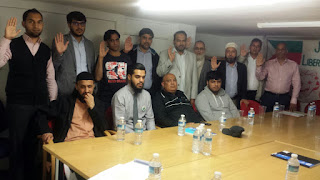