JKLF will hold an important press conference at its London Secretariat on Thursday 31st December 2015 at 12 noon.

London (29 December 2015)
JKLF will hold an important press conference at its London Secretariat on Thursday 31st December 2015 at 12 noon.
The address of the secretariat is
JKLF Diplomatic Bureau
119-123 Cannon Street Road,
Basement North
London
E1 2LX
The press conference has been called by the JKLF’s Diplomatic Bureau and will be addressed by its Chairman Professor Zafar Khan along with leaders of the JKLF’s British Chapter.
The press conference has been called to protest at the arrests in Indian occupied Jammu Kashmir of JKLF’s Chairman Mr Yasin Malik and other senior JKLF leaders on trumped up charges of attempt to murder and waging war against the Indian state.
On 27th December Mr Malik and other senior JKLF leaders were charged and remanded in judicial custody at the Srinagar central jail for 10 days.
It must be remembered that Mr Malik and his colleagues were peacefully protesting against the terrorism of the so-called state sponsored Village Defence Committees-VDCs that have unleashed a reign of terror against the  Muslim population in general and  pro freedom activists in particular, in the Jammu province. The VDC’s current terror tactics included the murder of a mother and her son in the Budhal area of the Jammu region.
At the press conference JKLF will call on its members to mount a suitably effective political and diplomatic response against the inhuman and undemocratic arrests and oppressive methods meted out to the JKLF and its leaders by the Indian occupation authorities in Indian occupied Jammu Kashmir.
Members of the Press and media are therefore cordially invited to attend this important press conference.
Thanking you in anticipation.
For and on behalf of the JKLF
Diplomatic Bureau
Mahmud Hussain
07956400834 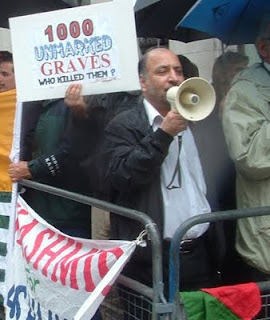 UN Human rights day was observed on December 10. Once again seminars and lectures were delivered on this issue, articles appeared in the media, highlighting the importance of human rights.
We read and hear of this year after year, and it is stressed that no-one should be denied basic human rights in any circumstances.

Western nations always advocate the importance of human rights and express their displeasure against regimes who violate these rights.

But, they keep quiet as far as the human rights are concerned in Kashmir?

The Kashmir people are not only deprived of their basic human rights, but are mercilessly annihilated. The laws are imposed depriving people of every basic human rights. People including women and children, are shot at, killed and houses searched without warrant. The army has been given unlimited power, and are free of any kind of persecution.

Amnesty international in its report confirmed thousands of un-marked graves.

The international community knows and understands everything, but is keeping criminally silent, only because of its trade economic ties.

The state- sponsored systemic killings is fully operational in Kashmir. The only crime of the poor defenseless is that they are asking for their right of self-determination. A right which was recognized by both India, Pakistan and International community, including United Nations.

It is high time that the people of the world use their voice against this injustice and against the violation of the sanctity of human rights.

The Jammu Kashmir Liberation Front-JKLF- has given a cautious welcome to the  meeting in Islamabad today between the Indian foreign minister Mrs Sushma Sawaj and Prime Minister of Pakistan Mr Nawaz Sharif in a statement issued her in London today.

JKLF’s head of Diplomatic affairs Professor Zafar Khan said that the JKLF cautiously welcomed the meeting at this level between India and Pakistan and, hoped that both countries will engage with each other and with the pro freedom leadership purposefully, to secure a lasting and peaceful resolution of the sixty eight year old dispute.

He reiterated JKLF’s position that Kashmir is not a territorial dispute between India and Pakistan and that both countries owed it to the future peace and prosperity of 1.5 billion people of India, Pakistan and Jammu Kashmir to find a just, democratic and peaceful resolution of the Kashmir dispute, based on the unfettered, inherent and inalienable right to self-determination of 20 million Kashmiris across the LoC and in the Diaspora.

Zafar Khan added that without a shadow of doubt peace is the only option over Kashmir, and Kashmiris are ready to play their part in the process and, needed partners to engage with, for a solution of the future political status of their country. He urged India and Pakistan to seize the opportunity and make a unified and free Kashmir, a bridge of friendship, peace and lasting prosperity for South Asia.