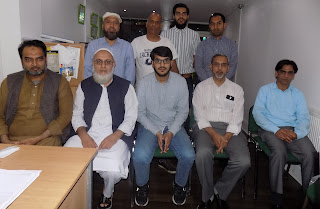 (London 29 August 2015): Jammu Kashmir Liberation Front (JKLF) London Branch is holding its branch elections on 4th September 2015 in which new office bearers for the next 4 years will be elected.

A meeting of JKLF London Branch was held in London, in which the current branch was officially dissolved. Members have already submitted their nominations and elections will be presided over by member of JKLF Election Commission Mr Tariq Sharif.

Speaking on this occasion, Senior Leader of JKLF in UK Mahmood Hussain said that the members were enthusiastic about renewing their commitment for their part in the liberation movement and will re-affirm their pledge for the just struggle for the independence movement.  Mahmood Hussain said that JKLF has become the most powerful movement advocating for inalienable and unfettered right to self-determination for the divided people of Jammu-Kashmir. He further said that JKLF represents unwavering, unyielding and selfless commitment for peaceful and democratic resolution of the issue for self-determination and its members will renew their commitment to the freedom movment and will set out seek international attention and support in the years to come