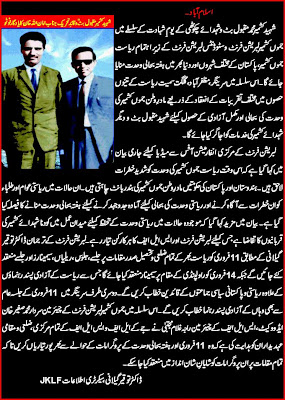 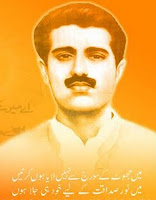 ( ): Jammu Kashmir Liberation Front (JKLF) will commemorate the 26th Martyrdom anniversary of its founder Maqbool Butt Shaheed all around the world. JKLF will hold seminars, public meetings and demonstrations in , Kupwara (IHK), all cities of Azad Kashmir, Gilgit, important cities of , , and .

Amanullah Khan (Supreme Head JKLF) has directed through a circular to all Zonal, Divisional and District level JKLF office bearers to hold peaceful programmes in order to pay tribute to the martyred leader. The circular pointed out that we owe it to the future generations of to highlight and spread the vision of Maqbool Butt Shaheed for which he and other thousands of Kashmiris laid their lives.

11 February is being commemorated as Maqbool Bhat’s death anniversary. On this day Kashmiris all across the world remember their hero with honour and pride. Maqbool But was hanged by in Tihar jail on and his body was never given to Kashmiris for the burial.

Leaders of Jammu Kashmir Liberation Front (JKLF) have been released unconditionally along with his 10 associates by authorities in Muzaffarabad.

Earlier, hundreds of JKLF activists had gathered in Muzaffarabad and other parts of  on  to demonstrate against Zardari’s visit to the disputed region.

Baton Charge of JKLF Leaders and their arrest in Muzaffarabad Condemned

London (January 06, 2010) Jammu Kashmir Liberation Front –JKLF- has strongly condemned the heavy baton charge of JKLF leadership and their subsequent arrests in Muzaffarabad on Tuesday 5th January 2010, at the hands of Pakistan's forces during a peaceful demonstration in Muzaffarabad.

JKLF top leadership including Raja Haq Nawaz, Raja Mazhar Iqbal, Chaudry Yousuf and Students wing Chairman Raja Mujtaba have been severely injured by the police in Muzaffarabad yesterday morning. 11 people including the above have been arrested after they were severely beaten up by Pakistani police during a demonstration in Muzaffarabad. Earlier the police objected to the holding of a peaceful demonstration on the occasion of President Asif Ali Zardari’s visit to the disputed region. The witnesses have seen whole JKLF leadership full of blood on the face and cloths before their arrest.

Hundreds of JKLF activists had gathered in Muzaffarabad and other parts of on Tuesday to demonstrate against Zardari’s visit to the disputed region.

In a statement issued from , Head of the JKLF Diplomatic Committee Prof. Zafar Khan and President of JKLF UK Zone Haji Rauf Khan have said that such indiscriminate baton charge on peaceful demonstrators and JKLF leaders will not weaken the Kashmiri people resolve for an Independent state. They further said that such oppressive and cruel measures will not dampen the struggle for the right to self determination and national dignity of Kashmiris.

JKLF in and IHK have also demanded immediate and unconditional release of its top leadership.

5th January a "Slavery Day" for Kashmiris: JKLF in Srinagar