(30 May 2013) Jammu Kashmir Liberation Front (JKLF) in has strongly condemned the arrest & banishment of JKLF leadership from Doda District of Jammu Kashmir. JKLF leaders led by Chairman Yasin Malik went to Doda () to oversee the relief work carried out by JKLF. The earthquake had hit this area two weeks ago and had left many homeless. JKLF had started a fund raising campaign for the victims of the earthquake. 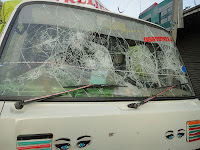 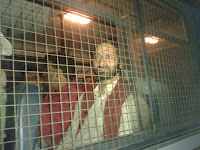 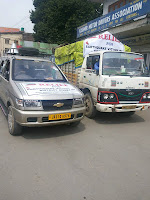 May 2013 Edition of "The Kashmir Post".Published and Circulated by Jklf London Branch.. 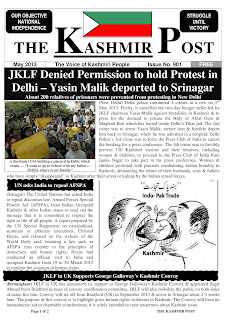 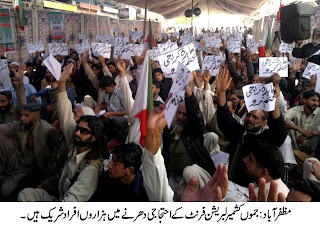 JKLF London Branch meeting was held in to discuss the Karachi Agreement and also other issues pertaining to freedom struggle of Jammu Kashmir. Meeting was presided over by Branch President Mahmood Faiz and was well attended by all office bearers and members of the branch.

Cllr Mahmood Hussain who is also Senior Vice President of JKLF UK Zone while speaking during the meeting condemned the Act 74 of AJK government. Cllr Hussain termed the Act 74 as an instrument of slavery for the nation and stated that Gilgit- Baltistan was integral part of Jammu Kashmir so should not try to unilaterally declare it as its province. He further said that such a move by the would not only violate the United Nation resolutions on Jammu Kashmir but also will give an excuse to do the same for Ladakh and .

Branch President Mahmood Faiz on this occasion urged  government not to back stab the Kashmiri movement but respect the integrity of . He demanded the revocation of Act 74 and other Acts which further divide Jammu Kashmir under Control & warned that such anti-movement activism by the Pakistan Government would back fire and JKLF along with its allies will be forced to launch a worldwide movement across the world against this.

JKLF London branch also congratulated their colleagues in Pakistan Administeed Kashmir for holding a huge protest demonstration in Muzaffarabad in which thousands of people participated. 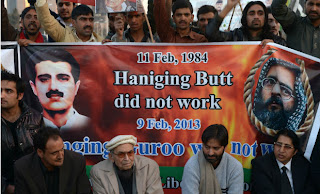 NEW DELHI: JKLF chief Yasin Malik who was released on April 15 from a 35-day house arrest will be holding a 48-hour hunger strike at the Jantar Mantar here from Friday afternoon to Sunday afternoon. Malik is here to seek support from the civil society in the rest of the country (outside if Kashmir) for his causes.
"We are here to ensure that our voices are heard by the Centre and also to register as part of the civil society in the rest of the country, which played such an important part in the 1994 cease fire that helped many militant groups to take the peaceful path," Malik told TOI, on Tuesday.
There are three main demands that Malik is here with and they include justice for the 32 people who have recently been sentenced for life imprisonment in Kashmir over 2012 and 2013, for being involved in cases of militancy that date back to before 1994, when the ceasefire was declared and those like Malik's JKLF laid down their arms and moved into non-violent movement even as they continued to be considered separatist activists in the Valley. The second plea that Malik will be making is to ask the Centre to return the body of Parliament attack accused Afzal Guru, who was hanged in Tihar jail and buried there, to his family in Kashmir.
Malik's third reason for the hunger strike protest is in demand for justice for the families of those three people killed in the Machhil sector of north Kashmir by the Army. When it was later found that the three men were killed in fake encounters, by the Army personnel in the border area, the Army men were suspended and charged with murder. While their trials are going on, their families have complained of being harassed by the Army. Some of the harassed family members have traveled to Delhi with Malik and will be protesting with him at Jantar Mantar, to seek reief and justuce from the government and also to seek support of the mainstream civil society in the country, for their cause.
Source: http://timesofindia.indiatimes.com/city/delhi/JKLF-chief-Yasin-Malik-to-hold-hunger-strike-at-Jantar-Mantar/articleshow/19806768.cms
Newer Posts Older Posts
Subscribe to: Posts (Atom)