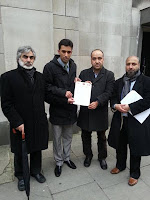 A protest outside the Indian High Commission in  on  on the occasion of World Human Rights Day by JKLF , highlighted the continued Human Rights Violations in  by Indian Armed forces. Members and supporters of Jammu Kashmir Liberation Front (JKLF), along with the supporters of the Kashmiri cause gathered in front of Indian High Commission in  where they shouted slogans against Human Rights abuses by Indian troops in . The demonstrators were holding play cards and banners highlighting the deteriorating human rights situation in . The objective of the protest was to draw world attention towards the recent life sentences given to Kashmiri youth in Indian Held Kashmir.

The protesters called on the Indian government to immediately release all political. They also called on the international community the check the excesses that the Indian occupation forces have unleashed on the people of  over the last over two decades.

On , a kangaroo court in  awarded life sentences to two Kashmiris Sheikh Nazir Ahmed and Shoukat Ahmed, who had both spent nearly 15 years in Indian jails without trial after being arrested in 1990s. They were released on bail over 7 years ago but rearrested recently and awarded life imprisonment. Two weeks ago, another Kashmiri, Dr Qasim Faktoo was sentenced to life imprisonment under similar circumstance.

A memorandum was also presented to Prime Minister of India Dr Manmohan Singh. The memorandum highlighted that the iron fisted policy of Indian administration along with draconian laws continued to increase the possibility of blatant and unbridled violations of human rights. Saying that repression is not the answer to the popular sentiments of the people, the Kashmiri community representatives urged Indian government to pay heed to the saner voices with in  that were recognizing 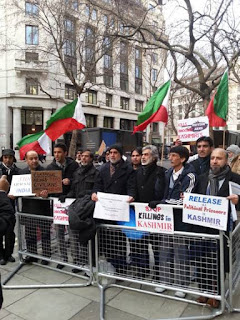 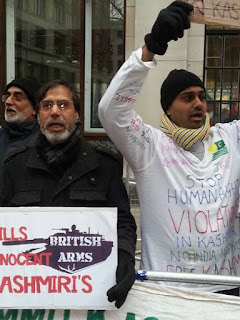 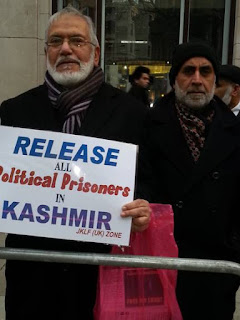 JKLF to Protest in London on World Human Rights Day

() Members of the pro-independence Jammu Kashmir Liberation Front (JKLF), will hold a protest demonstration at the Indian High Commission in against widespread human rights violations in Indian occupied on the occasion of World Human Rights Day on 10th December. It is to coincide with a shutter-down call by JKLF chairman, Yasin Malik, in Kashmir to protest against the recent cases of awarding life sentences to several Kashmiris under the notorious TADA law which was repealed in India as far back as 1995 but still used in Kashmir to suppress the Kashmiri  independence movement..

On , a kangaroo court in awarded life sentences to two Kashmiris Sheikh Nazir Ahmed and Shoukat Ahmed, who had both spent nearly 15 years in Indian jails without trial after being arrested in 1990s. They were released on bail over 7 years ago but rearrested recently and awarded life imprisonment. Two weeks ago, another Kashmiri, Dr Qasim Faktoo was sentenced to life imprisonment under similar circumstance.

A JKLF spokesman in said that “these are serious and worrying cases and point to Indian government intention to hoodwink the world opinion about what it has been doing in J&K for last 3 decades. It makes a mockery of empty gestures of ‘peace process’ and ‘political dialogue’.

“We have taken serious notice of the latest developments and have approached the Amnesty International, All Party Parliamentary Group on and other international human rights organizations to take up the issue with the Indian government.”

Background Information:
On the Association of Parents of Disappeared Persons and the International Peoples’ Tribunal on Human Rights and Justice in published an investigatory report accusing 500 serving Army, paramilitary and police personnel in Jammu-Kashmir of allegations of human rights violations in . The report entitled “stories of impunity in Jammu and Kashmir” sights 215 cases and named 235 army, 123 paramilitary, 111 police and 31 counter-insurgency personnel of  rights abuses such as extra-judicial  killings, enforced disappearances, torture of prisoners and raping Kashmiri women since 1990. Among the accused, there are 2 Major Generals and 3 Brigadiers, 9 Colonels, 3 Lieutenant Colonels, 78 Majors, 25 Captains belonging to the Indian Army and 37 senior officials of the paramilitary forces as well as a retired and current director general of the Jammu-Kashmir Police.

The 354-page report, which was compiled using information obtained through the Right to Information Act, includes witness testimonies as well as court cases and cases registered with the police, which have not been investigated.  The cases documented in the report reveal Indian government’s policy not to investigation or prosecution cases against the armed forces in Jammu-Kashmir.

On the other hand, Indian government has started to prosecute and punish pro-independence activists under the ‘lawless laws’ for agitating against Indian occupation of Jammu-Kashmir.

The Terrorist and Disruptive Activities Act (TADA); which was condemned by Indian judiciary at the highest level in 1995 and repealed, under which a person could be detained without formal charge or trial for up to one year and which allowed court hearings to be conducted in secret with keeping the identity of any witness secret and where confessions by torture were permissible on simple police assurance that it was obtained voluntarily.

In 2008, the UN Working Group on Arbitrary Detentions ruled that 10 individuals detained under the PSA in J&K had been arbitrarily detained in violation of articles 7, 9, 10 and 11(1) of the Universal Declaration of Human Rights and Articles 9 and 14 of the ICCPR.  It called on the Government of India to bring its laws in conformity with its international human rights obligations.

‘The Working Group is aware of the political  sensitivities regarding the state of Jammu and Kashmir and the complex law and order situation ensuing in that part of the country.  As a part of its crisis management system, the Government is using laws of preventive detention, including the PSA …. Be that as it may, any legal, administrative or other mechanism employed, must conform to international human rights standards and obligations undertaken by the Government of .’
UN WGAD opinion on 10 PSA cases from J&K,

“The PSA violates international human rights law and standards by providing for detention without trial while denying the possibility of judicial review and other safeguards for those in detention required under international human rights law. It also violates the principle of legality by defining offences so broadly as to allow security officials to detain individuals on extremely vague grounds including for exercising their rights to peaceful assembly and freedom of expression.” A ‘Lawless Law’, Detentions under the J&K Public Safety Act  - Amnesty International, March 2011

Out of the over 600 cases studied by AI, approximately 290 detainees were found to be booked under the Arms Act offences. In approximately 160 cases, detainees were alleged to be in possession of fire arms or other such weapons when arrested but only 3 out of the 290 detainees were eventually convicted for possession of weapons. In Jammu-Kashmir the Armed Forces Special Powers Act, facilitates impunity for abuses and violations. It empowers Indian Security Forces to search homes and make arrests without warrants and provides them the right to shoot-to-kill with total immunity from prosecution. The Jammu & Kashmir Public Safety Act (JKPSA) empowers Indian forces to detain persons without trial for up to 4 for a broad range of activities that would be considered political and civil rights elsewhere in the world.