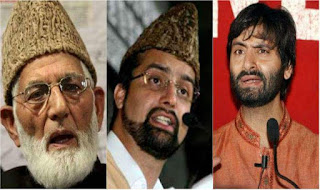 JKLF, Hurriyat’s appeal for protest on Friday after Nimaz, hoist Black flags as a mark of protest against conspiratorial designs of rulers, arrests and oppressive measures….


Communal harmony of Kashmiri Muslims is exemplary but today so-called rulers for their lust of power have started abusing us of being killer cats.//Incarcerated JKLF chairman Yasin Malik

SRINAGAR //Conspiratorial designs to change demography of Jammu Kashmir turn majority into minority, harm the historic religious harmony by constructing walls of hatred for Kashmiri Pandits and oppression unleashed against Jammu Muslims are not acceptable and no Kashmiri can tolerate these silently. When so-called rulers instead of answering about these matters, dub Kashmiri Muslims as cats (killers), how can one stay silent.

Black flags will be also hoisted and waved throughout the valley against oppressive behaviors of India and its Kashmiri stooges on the same day. This was announced after mutual consultations between APHC (G), APHC (M) and JKLF today. During joint consultations all the three parties held deliberations regarding the recent developments and decided to call for protest on Friday.

It was said that the conspiratorial agenda like construction of separate colonies for Pandits, army men and outside Kashmiris, implementing east India company type new industrial policy and oppression against Jammu Muslims is not tolerable to any Kashmiri and as these are directly threatening our very existence.

It was said that so-called rulers instead of answering these questions are busy dubbing Kashmiri Muslims as killer cats, putting all those who protest against their conspiratorial designs behind bars or confine them to their homes and placing restrictions even on freedom of speech.

It was decided to continue the protest against these oppressive and conspiratorial designs and a joint appeal was made to people to hold peaceful protests against these conspiratorial agendas of so-called rulers, spree of arrests and house arrests especially arrest of JKLF chairman Muhammad Yasin Malik and shifting him to central jail Srinagar and house arresting APHC (G) chairman Syed Ali Shah Geelani and APHC (M) chairman Mirwaiz Molvi Umer Farooq on Friday 3rd June
2016 after Friday prayers .

Black flags will be also hoisted and waved throughout the valley against oppressive behaviors of India and its Kashmiri stooges on the same day.

Meanwhile JKLF incarcerated chairman Muhammad Yasin Malik in a message sent from incarceration has said that resisting conspiratorial designs of India and its Kashmiri stooges jointly is need of the time. He said that this is the struggle of our very survival and no Kashmiri can show neglect this resistance. He said that the communal harmony of Kashmiri Muslims is exemplary but today so-called rulers for their lust of power have started abusing us of being killer cats.

Yasin Malik said that this statement is disgraceful not only for Muslims but for our Pandit brethren too who have been dubbed like agents by same ruler. Yasin Malik appealed people to follow all joint programs and keep on resisting anti-kashmiri designs with their peacefully…

Meanwhile JKLF has strongly condemned the continues house arrest of JKLF vice chairman Showkat Ahmad Bakhshi who has been placed under house arrest from last 7 days. While condemning his house arrest JKLF termed it as most undemocratic.

All Ex-presidents of JKLF On 39th Anniversary of JKLF.

Hats off, these people for long commitment, I feel proud surrounded by pioneers of this freedom struggle. Old stalwarts of JKLF Lord qurban Hussain and siddiqque bhatti also there. 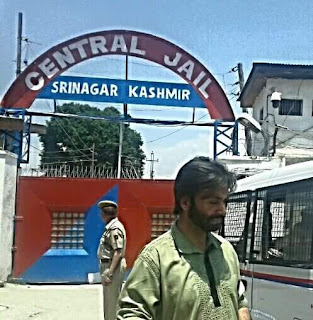 
Srinagar// incarcerated JKLF chairman Muhammad Yasin Malik has been today sent to Srinagar central jail. He was kept at Kothi Bagh police station for last 5 days and was not presented before any court or magistrate after which he wrote a hand written letter to chief justice of high court Srinagar.

In his letter Yasin sahib wrote that that it has become the routine of the government authorities to regularly put him behind bars without following the due procedure of law. That he has been arrested more than hundred times in last few years without lodging any FIR and during this time he has not even been produced before any executive or judicial magistrate.

Yasin sahib wrote that his liberties have been off and on curtailed and unnecessarily interfered with and it  has been now four days since he was lodged in an isolated room of police station Kothibagh and he has till now not been produced before any magistrate.

It is in place to mention that he was treated for various health issues and was discharged from a hospital recently. This letter was delivered at the residence of chief justice day before and today morning JKLF chairman was shifted from kothibagh police station to police control room hospital after which he was shifted to central jail Srinagar.

Before being sent to central jail, JKLF chief in a message said that jail is his second home and if so-called rulers realize that they can deter resistance camp from perusing the path of justice by means of oppression, suppression, jails and interrogations then they are living in fool’s paradise.

Incarcerated JKLF chairman Muhammad Yasin Malik said that no Kashmiri will ever accept Jammu Kashmir being turned into another Palestine and conspiratorial designs of India that are being implemented by its Kashmiri stooges will face a stiff resistance from Kashmiris.

He said that construction of separate settlement colonies in the name of Pandits, colonies for ex-Indian army men, East India company type industrial policy, and oppression against Jammu Muslims are designs to change demography of Jammu Kashmir and rulers and their masters should know that they will face stiff resistance from us on these issues.

“Taking a dig at Ms Mehbooba for her “Pigeon and Cat” statement he said, “This speaks of Ms Mehbooba Mufti’s mental bankruptcy.” Yasin malik said that the power has totally exposed her and her true colors are fast coming to surface slowly. Yasin said condemning the statement, “Muslim Kashmiris have never touched rather ensured safety and security of Kashmiri Pandits who are part and parcel of our communal brotherhood.”

He reminded Ms Mehbooba of 1947 massacre of Jammu Muslims, Kashmir massacres, saying, “Cats are those who killed and massacred Muslims of Jammu in 1947; are those who are responsible for countless massacres including Gawkadal, Kupwara, Handwara, Sopore, Vandhama, Hawal, Khanyar, Chattisinghpora, Bijbehara and countless other killings.''

“Role of Indian armed forces and Jammu and Kashmir Police is akin to that of cats Ms Mehbooba Mufti has talked about,” Malik asserted, “it is they who have selectively killed and tortured Muslims of Jammu and Kashmir.”The jailed leader said, “Ms Mufti is lost in the garb of power.

Yasin Malik said that situation is like do or die for Kashmiri nation and if it needs our blood to stop these conspiratorial designs we will spill that too but will not let these conspiracies to succeed. Yasin sahib said that so-called rulers by oppressive methods like Arrests, raids, intimidations, jails, tortures, false propaganda want to defer us from our resistance but they should know that these measures will not and can never deter us from perusing the path of Azadi and protecting our national interests. 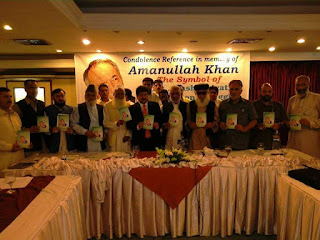 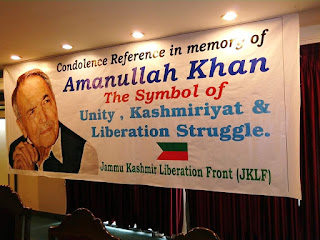 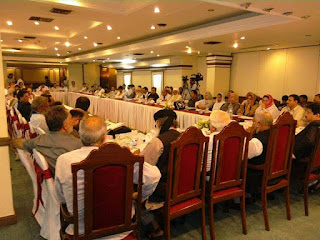