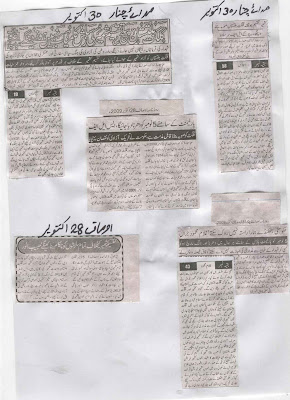 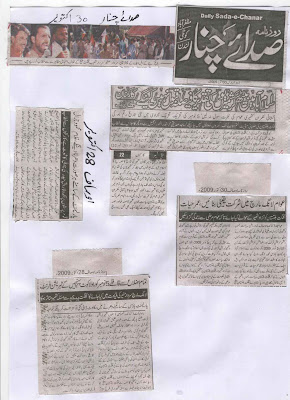 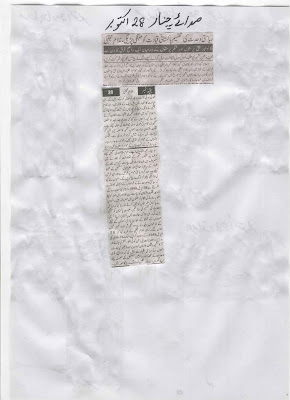 
Lyrics by Dr. Toqeer Gilani.
JKLF gears momentum for long march against Pakistan's Gilgit Baltistan Package. The LONG MARCH will be in Islamabad on 5th November 2009.

(London 27 October 2009) Intra-Kashmir Conferences in all regions of Kashmir are imperative to find final settlement of Kashmir issue. This was stated by leaders of both parts of Kashmir in a reception hosted by Jammu Kashmir Liberation Front (JKLF) in the honour of Awami National Conference Vice President Mr. Muzaffar Shah here in London.

Leader of Awami National Conference Mr. Muzaffar Shah while expressing his party's point of view said that participation in elections cannot dilute the nature of Kashmir issue, because the issue itself has a historical and geographical background. Mr. Shah emphasized that tripartite talks are of utmost importance and the cross section of people, irrespective of political affiliations, from all regions of the State should converge together and discuss what could be the best for Kashmiri people. Deliberating about Gilgit-Baltistan Mr. Shah said that the measures adopted by Pakistan have weakened the Kashmir cause.

Speaking on this occasion Lord Nazir Ahmed said that he believes that Gilgit-Baltistan is an integral part of Kashmir state but the double standards of certain section of Kashmiri leadership have confused the whole situation. He said that according to Pakistani government, leaders of Azad Kashmir including President and Prime Minister were taken into confidence about the Gilgit-Baltistan Package. He further said that those people who are on the payroll of India and Pakistan and are running Centres on their behest can not be legitimate representative of Kashmiri people on any forum. These people only project the ideology of their masters and we can not expect any good from them for Kashmiri people or for the freedom struggle. Lord Ahmed welcomed Mr. Muzaffar Shah and said that such interactions among Kashmiris are vital for resolution of Kashmir issue.

Professor Zafar Khan, Head of Diplomatic Committee of JKLF while speaking on this occasion said that it is very unfortunate that some leaders are confusing people about the “Definition of Kashmir State”. He said Pakistan’s package of Gilgit-Baltistan was a test for the Kashmiri leadership but unfortunately apart from few leaders most of them have failed miserably. He said that stand of Amanullah Khan, Syed Ali Gilani, Majid Malik, Khalid Ibrahim, and Shabir Shah about Gilgit-Baltistan has been consistent with the aspirations of the people. Prof. Zafar Khan expressed his concern about Pakistan’s move to give Gilgit-Baltistan a provincial like status especially since the region was not part of Pakistan but an integral part of the state of Jammu Kashmir whose constitutional and political future status is yet to be decided according the United Nations resolutions. He further said JKLF on both sides of the LoC has started a mass mobilisation of people against governor’s rule in Gilgit-Baltistan and in this regard a historical long march will held in Islamabad, Pakistan on 5th November.

The function was conducted by Mr. Zaffar Sharif Secretary of JKLF Diplomatic Committee, who at the end thanked Mr. Muzaffar Shah and Lord Ahmed for their presence. Zafar Sharif impressed upon Awami Nation Conference to play their role in order to bring the remaining mortals of Maqbool Butt Shaheed to Kashmir. 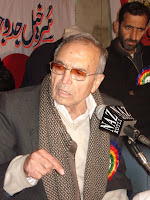 Mr. Amanullah Khan, Supreme Head of Jammu Kashmir Liberation Front (JKLF) has said that the overall performance of the United Nations Organization and of the Azad Government of the State of Jammu Kashmir which had come to being on October 24, 1945 and 1947 respectively had not been satisfactory as both has failed to achieve what they had been formed for. The UNO Mr. Amanullah Khan said, had been created to establish peace with justice in the world which it had failed to do as could be seen from its failure to solve Kashmir Issue and rid Kashmiris of the reign of continuous terror let loose on them during last over six decades. The Azad Government of Jammu Kashmir State, he said, had been established to enable the people of entire State determine their future in full accordance with their freely expressed will but the political leadership of Azad Kashmir had been struggling more for power in Azad Kashmir than for liberation of the entire State. The third section of territory i.e. Gilgit Baltistan had been kept segregated from rest of the State politically, administratively and constitutionally for over 60 years and had now been practically turned into a .

Mr. Amanullah Khan was commenting on the performance of the UN and Azad Government of Jammu Kashmir on the occasion of their 64th and 62nd anniversaries respectively.

The JKLF Supreme Head called upon the people at the helm of affairs at the UN and in Azad Kashmir to concentrate on and accelerate their efforts to achieve what they were formed for. No permanent peace could be achieved at least in unless problem was solved peacefully, equitably democratically and honorably on the basis of the freely expressed will of the people of the entire State of as it stood on . 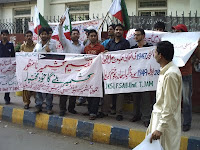 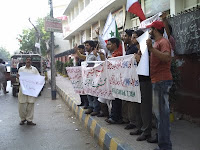 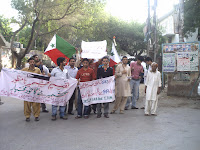 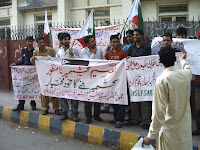 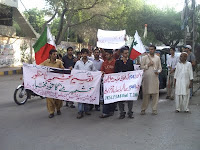 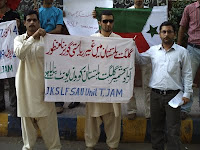 Pictures of Contact Compaign by JKLF about Gilgit-Baltistan Package

JKLF condemned the Baton Charge of People in Bijbehara, Kashmir

London (October 22, 2009) Jammu Kashmir Liberation Front –JKLF- has strongly condemned the heavy baton charge of people in Bijbehara, Kashmir at the hands of India's occupation forces during a peaceful demonstration in Baramullah.

Several persons including ISL chairman Shakeel Bakshi, Umat-I-Islami president Qazi Yasir, Zonal President of JKLF Abdul Qadir Rathar and JKLF Senior Vice Chairman S.M. Afzal were also injured in the baton charge  on Wednesday evening after security personnel objected to the screening of a documentary on Kashmir on the 16th anniversary of 1993 Bijbehara massacre that had left 40 people dead.

People had gathered in-front of martyr’s graveyard Bijbehara on Wednesday evening to pay tribute to Martyrs and watch the documentary. The Indian security personnel in large numbers reached the venue and ransacked all the equipments and also resorted to heavy baton charge on the crowd that had been watching the documentary.

In a statement issued from London, Head of the JKLF Diplomatic Committee Prof. Zafar Khan and President of JKLF UK Zone Haji Rauf Khan has said that such inhuman incidents in Kashmir clearly show India’s intolerant behaviour towards Kashmiris non-voilent movement for a political settlement of Kashmir dispute. He said that indiscriminate baton charge on peaceful people and separatist leaders will not make Kashmiris retract from their demand of free and fair plebiscite in . He further said that such oppressive and cruel measures will not dampen the struggle for right to self determination and national dignity by the masses

Bijbehara, Oct 21: Several persons including ISL chairman Shakeel Bakshi, Umat-I-Islami president Qazi Yasir and JKLF Senior Vice Chairman S.M. Afzal have been injured in the clashes that broke out here late evening after police objected to the screening of a documentary on Kashmir on the 16th anniversary of 1993 Bijbehara massacre that had left 40 people dead.

Eyewitnesses said thousands of people gathered in-front of martyr’s graveyard Bijbehara after evening (Magrib) prayers to watch the documentary. “The Special Operations Group (SOG) personnel reached the venue and ransacked all the equipments including the projector. They also resorted to heavy baton charge on the crowd that had been watching the documentary. Several persons sustained injuries in the police action,” they said.

The locals of the area also alleged that the troopers went berserk and smashed the window panes of several houses and beat up many pedestrians.

Earlier, in the morning police according to the residents removed all the banners and posters of the Tehreek-I-Hurriyat (Teh) and JKLF. (www.risingkashmir.com)

JKLF (IHK Zone) to discuss its strategy for Long March 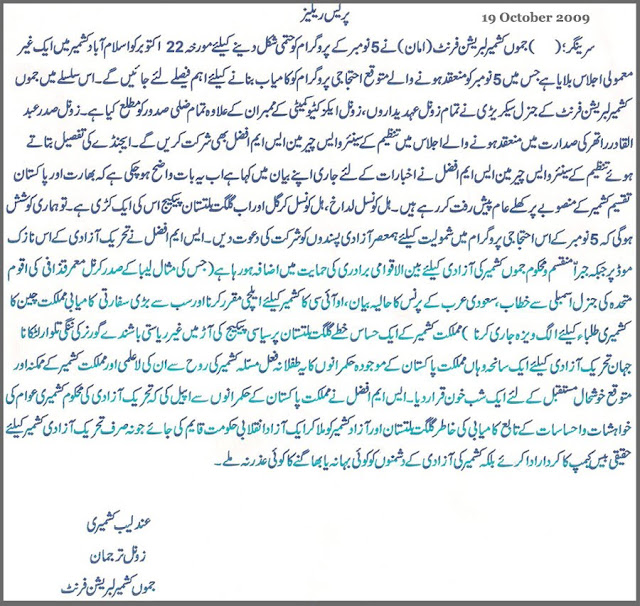