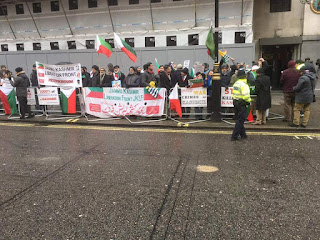 Defying the subzero temperatures, party members as well as members of Kashmiri community flocked from all over the UK to protest against the brutalities of India in Jammu Kashmir and to demand India to handover the remains of Maqbool Butt, whose extra judicial killing at the hands of India in 1984 has proved to be the ignition for one of the longest freedom movements in the recent history. The location of protest has become synonymous with protest site for Kashmiris as well as Indian minorities suffering from Indian state sponsored terrorism, and today's protest was one of the largest at the site since the dark day in 1984.

Protesters chanted slogans denouncing Indian terrorism and oppression in Jammu Kashmir and vowed to continue fighting for freedom and raising their voices against foreign occupation of Jammu Kashmir at every platform. Jammu Kashmir is the most militirized regions in the world, yet occupiers India and Pakistan have failed to breakdown the ever growing unarmed resistance of Kashmiris,and the protests today highlighted the fact that this resistance is growing by the day.

As done at the previous protests, a memorendum was due to be handed to Indian High Comissioner in the UK to demand the return of Maqbool Butt's and Afzal Guru's remains, immediate stoppage to Indian brutalities in Jammu Kashmir and for Kashmiris to be given their unfettered right of self determination. However, the magnitude of the protest and significant presence of media and local audience led to the Indian High Commission refusing to accept the Memorandum . It was yet another instance where the veil came off the fake claims of India of being a democracy.
India does not even have moral courage to face peaceful people of Jammu Kashmir and accept a memorandum.

Speaking to the media, senior JKLF leaders paid rich tribute to Maqbool Butt and urged India to stop killing innocent Kashmiris, as such brutalities are only serving the purpose of strengthening their indigenous freedom movement in Jammu Kashmir and fulfil its promises and human rights obligations by allowing Kashmiris to determine their own political future.

Protesters vowed to continue this national freedom movement started by Maqbool Butt Shaheed until the dream of complete independent Jammu Kashmir is realised.

The protest was one of the series of events organised by JKLF UK Chapter to mark February as 'Month of Maqbool', with another large gathering expected in Bradford on 19th February. 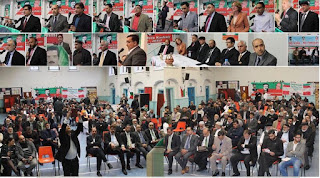 A large number of people from Bradford, Leeds and from other parts of the UK, including Maqbool Butt's son Shoukat Maqbool Butt, MP Imran Hussain, leader of Bradford council Suzan Hinch Cliff and dozens of local Lord Mayors and councillors participated in this anniversary program to pay tribute to Maqbool Butt Shaheed and his struggle.

During his speech, MP Imran Hussain assured the participants that as member of British Parliament and as a British Kashmiri he will continue to raise Kashmir issue in parliament. He stressed that over a million Kashmiries living in the U.K. should ask their MPs to play their part in the parliament to raise the issue  of Jammu Kashmir and human rights violations in the state. He paid tribute to Maqbool Butt and said Maqbool Butt sacrificed his life for an independent Jammu Kashmir, so option of independent Jammu Kashmir should be included in any future plebiscite.

President JKLF UK Chapter Sabir Gul also addressed to the gathering. He said that Maqbool Butt is our national hero and new generation of Kashmiries are scarifying their lives by following the footsteps of Maqbool Butt. He suggested that we should establish a national revolutionary government in Pakistani held Jammu Kashmir to bring this issue on international forums.

General Secretary JKLF UK Zone Syed Tahseen Gillani said that JKLF is the only political party present and active in all divided parts of Jammu Kashmir and It is leading the national freedom movement. He reassured the participants that JKLF will not let anyone divide our country or destroy our nonviolent democratic movement for freedom.

Chief Organiser Abrar Nisar urged the international community to play an active role to resolve the issue of Jammu Kashmir.

They condemned the recent statement by Indian army chief that peaceful protestors will be treated as militants. They also reminded India ,Pakistan and international community of their promises to resolve Jammu Kashmir issue according to the aspirations of the people of Jammu Kashmir. JKLF UK leadership made it clear that they will continue their struggle until victory.

JKLF UK has announced their next Maqbool Butt Shaheed anniversary program will be held in Stoke on Trent on 26 of February, followed by Bedford on 5th March and Birmingham on 12th March.
Newer Posts Older Posts
Subscribe to: Posts (Atom)