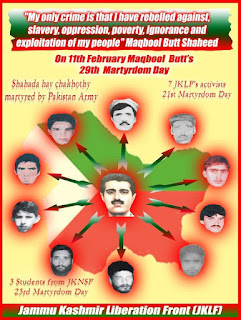 JKLF in  will commemorate the 29th Martyrdom anniversary of its founder Maqbool Butt Shaheed. A Protest in front of Indian High Commission London has been organized on 11 February 2013, in which protesters will handover a memorandum to Indian officials demanding remains of Maqbool Butt Shaheed returned to his family.

A seminar will also be held in House of Lords on 11 February 2013 in which British Parliamentarians, prominent Kashmiri leaders in  and other intellectuals have been invited.

JKLF in  have also launched a parliamentary petition to be signed by members of House of Commons and Lords during an All Party Parliamentary Group on  meeting held in  on . So far 30 members of  parliament have signed the petition.

Maqbool Butt, Kashmir’s most revered leader of the independence movement and a former ‘prisoner of conscience’,  was imprisoned in Pakistan for his radical views and was  labelled as an ‘enemy agent’ there, but ironically hanged by India on 11 February, 1984, exactly one week before his 46th birthday.  He was executed inside ’s Tihar Jail where he had been imprisoned for 8 years awaiting trial of a politically motivated case against him.

Apart from the programmes mentioned above, there will be many events by JKLF branches throughout  including a large public gathering in  on .

JKLF in  has appealed people in  to join these protests and support these demonstrations by bringing their families. 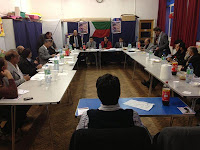 () The UK chapter of the pro-independence Jammu Kashmir Liberation Front (JKLF), in its extra ordinary meeting of the executive and working committee held in Watford near London, has warned of dire consequences if JKLF leaders arrested during the ‘jail bharo’ movement are not released immediately without charge along with many other Kashmiri activists who were sentenced earlier in the month under the draconian laws and framed up charges from 20 years back.

In a press statement released from , the JKLF announced that their members will start picketing Indian missions in and including embassies and consulates to draw the world attention to the plight of Kashmiri prisoners in J&K and in Indian prisons.

The JKLF statement said that has become a police state where freedom of expression and freedom of speech is dealt with long prison sentences and where men, women and small children are imprisoned because they demand their right to freedom and independence.  Instead of punishing the 500 army and security forces personnel who have been named in the latest report as the perpetrators of human rights violations including, rape, molestation, kidnapping and extrajudicial killings, the Indian and state authorities continue to punish innocent people belonging to many different pro-freedom organisations.  During the 3 hour long meeting, JKLF leaders expressed hope that Indian civil society seems to have woken up in Delhi over the case of  a student rape and needed to pay urgent attention to what was happening in Kashmir.

“Our demand is simple that all political prisoners should be released immediately and the draconian laws that prevent people from protesting against injustices and atrocities must be withdrawn.

“JKLF is not just a name but it’s a face of the revolutionary movement, and each one of its leaders and workers is committed to the cause of national independence and if Indian and state authorities think that they will be able to supress our movement by imprisoning and awarding long sentences to freedom fighters, they have to think again”, the JKLF leaders said.

JKLF president Azmat Khan, told the meeting that international diplomatic and political pressures was needed, urged members to contact their members of UK and European Parliament to apprise them of  the latest situation in Kashmir.  He said that he was going to raise the issue with international human rights organizations and the UN Human Rights Council. He said, that he was hopeful that Pakistani mission in the UN would draw the attention of the international community towards the dire situation in Indian occupied during the forthcoming UN Security Council meeting where the Syrian situation is to be debated.

On , a kangaroo court in awarded life sentences to two Kashmiris Sheikh Nazir Ahmed and Shoukat Ahmed, who had both spent nearly 15 years in Indian jails without trial after being arrested in 1990s. They were released on bail over 7 years ago but rearrested recently and awarded life imprisonment.

London (6th January 2013): Jammu Kashmir Liberation Front (JKLF) London branch has extended its full support to the five-phase protest programme “Jail Bharo Tehreek” against life sentencing of Kashmiri prisoners, death sentences and subjecting them to the worst kind of torture. The agitation started on Friday 4th January from the party headquarters at Maisuma, in which around 50 activists including JKLF Chairman Mohammad Yasin Malik were arrested and sent to central Jail. The agitation will continue till January 14 in all cities and towns of Indian occupied .

In a statement issued after the emergency meeting of JKLF London Branch, the statement said that seems to have started the new judicial torture policy to suppress the genuine sentiments of Kashmiri people. The branch lauded the efforts of JKLF leadership by highlighting the much important issue of plight of Kashmiri prisoners. The statement further said that Illegal life imprisonment, death sentence & torture cannot stop the kashmiri peoples struggle for national independence.

Speaking on this occasion, JKLF London Branch President Mahmood Faiz said that Kashmiri’s living abroad stand with the leadership of JKLF, fully support the programme to highlight the plight of Kashmiri prisoners across .

The meeting was addressed by Senor Vice President of JKLF in , Cllr Mahmood Hussain. He said that has not yet learnt a lesson by hanging Maqbool Butt Shaheed and killing thousands of Kashmiris. Cllr Mahmood Hussain added that such actions by the Indian government over the years have given us Kashmiri's more courage and strength to fight against the forcible occupation of our motherland.