Over a dozen Kashmiri parties, associations and NGOs based in the have pledged to work together and make a joint efforts for the liberation of their motherland and to drop minor differences in order to forge unity of thought and action amongst various Kashmiri organisations actively involved in the freedom campaign. This was declared in an all party consultation conference hosted by the UK & Europe chapter of the pro-independence Jammu Kashmir Liberation Front (JKLF). The conference, believed to be a first of its kind, was held in the Northern town of , where only party heads were invited by JKLF to deliberate proposals for Kashmiri unity. Twenty six heads of various Kashmiri pro-independence and pro-Pakistan parties working in the took part in a 5 hour debate, which was held in-camera under Chatham House rule. Apart from these party heads who belong to Azad Kashmir, several Kashmiri dignitaries and observers were present but no members of the public or press were invited to the event.

At the end of the conference a 3 point joint declaration was agreed upon to ensure that all Kashmiri organisation would continue to meet together in the future to form a strategic alliance which would work towards increasing international political and diplomatic pressure on India and Pakistan to honour their pledges for self-determination and to resolve the long-standing Kashmir issue peacefully.

The first point on the declaration reads that “we (the organisations) recognise and affirm that the Kashmiri Diaspora in the has an important role and stake in the liberation movement and we pledge to perform a meaningful role more effectively”. In order to accomplish this and to adapt a meaningful strategy for the Kashmiri campaign, all parties agreed for the JKLF to reconvene  another meeting where member parties from the existing two alliances (Rabata Committee and Independence Alliance) and 4 prominent parties which are currently not part of any alliance would be invited to jointly work on modalities for a single united forum and that prior to this JKLF would engage with these two alliances for possible consultation. The 3rd point in the declaration states that  the conference rejects India Pakistan bilateral parley on Kashmir without legitimate Kashmiri representation as equal stakeholders for their title to self-determination and demand that the governments of India an Pakistan should take immediate measures to discharge their historical obligation towards self-determination for the people of all parts of the former state of Jammu-Kashmir.

The conference opened with a presentation from JKLF president, Mr Azmat A Khan, who invited delegates for a debate and introspection of the current situation and dilemmas faced by the Kashmiri movement and raised several questions on the role of Kashmiri parties in the UK with suggestions for improvement areas in order to effect a meaningful international campaign to support the independence movement from UK and Europe.

In a statement issued after the conference, JKLF president, Azmat A Khan said that he was encouraged by the support and commitment shown by many Kashmir leaders and that he was looking forward to work with many different organisation with different ideas to strengthen the international campaign for Kashmiri independence. He said that all delegates were very keen to look for new ways to move forward and to put together resources and manpower in a more productive way to internationalise the issue of in the world media and in the international forum instead of repeatedly highlighting the issue within the Kashmiri community. 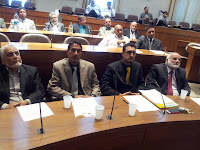 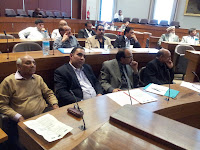 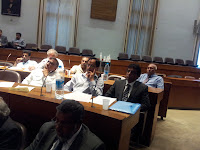 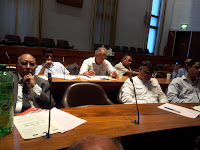 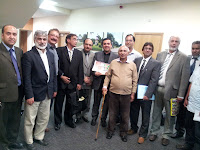 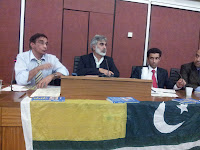