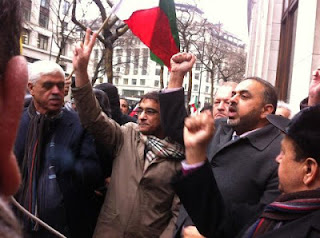 A petition signed by 38 British Parliamentarians was also presented to the officials of the high commission on this occasion. The petition asked the Indian President Pranab Mukherjee to handover the mortal remain of Maqbool Butt Shaheed to his relatives for proper burial.

Speaking on this occasion, JKLF in Britain, Prof Azmat Khan, condemned the Indian government decision to hang an innocent man, Afzal Guru, over the parliamentary attack case and called it a 'mockery of justice', and said that Afzal Guru was framed by Indian security services people and denied due legal process because they needed a scapegoat.

He paid rich tributes to Maqbool Butt Shaheed and said that the only way forward for Kashmiri nation is to follow the teachings in practical terms and the ideology of this great Kashmiri leader.

London Kashmiris and members of JKLF as well as members of UK Parliament are gathered here today to protest in strongest terms against the hanging of Afzal Guru on Saturday who was not involved in the alleged parliament attack but given the death penalty to satisfy ‘collective conscience’ of blood thirsty elements in India who seek to victimise Kashmiris for demanding their right to self-determination. We see this case as another attack on the  collective concience of Kashmiri people. The president of made a political decision to hang Afzal Guru just as he did 29 years ago to hang the founding leader of the Kashmiri independence movement, Maqbool Butt, on 11th Februrary 1984. It would appear that learnt nothing from that mistake.

Amnesty International has expressed serious misgivings about the politically motivated trial against Afzal just as it did with the trial and execution of Maqbool Butt Shaheed.29 years ago this month.
Time will prove that  cannot hang the Kashmiri sentiments to be free. Our people in Jammu-Kashmiri have not forgotten the fact that your government did not have the decency to return the mortal remains of Maqbool Butt Shaheed to his family and we hope that your government will not make the same mistake again in the case of Afzal Guru. It was the hanging of Maqbool Butt in 1984 that fuelled the people’s revolution in late 1980s and we firmly believe that Afzal Guru’s blood will haunt Indian occupation forces in for years to come.

We sincerely hope that your governemnt will not make the same mistake as it did in the case of Maqbool Butt of not handing over his body to his family in Kapwara. We demand that Afzal Guru’s body should be handed over to his family in Sopore without further delay.

We attach a signed petition from 37 members of parliament addressed to the president of asking him to authorise the handing over of mortal remains of Maqbool Butt Shaheed to his family.

Joint Letter from the All Party Parliamentary Group on

To
His Excellency, Parnab Mukherjee
President of , ,

We the undersigned members of parliament would like to appeal to your office to order the mortal remains of Kashmiri leader, Maqbool Butt, who was executed in Tihar jail, on and buried within the jail premises, to be handed back to his family in or to his children living in .

We make this appeal on humanitarian grounds as Maqbool Butt’s family members were not allowed to see him at the time of his execution and have waited long enough to receive his dead body for a decent burial in .

JKLF in United Kingdom condemned the hanging of Afzal Guru‏

JKLF leaders in London have condemned the Indian government decision to hang an innocent man, Afzal Guru, this morning over the parliamentary attack case and called it a 'mockery of justice', and said that Afzal Guru was framed by Indian security services people and denied due legal process because they needed a scapegoat.

"The hanging of Afzal Guru is a clear indication to Kashmiri masses that Indian government is not interested in resolving the issue and wants to bury the independence movement by imprisoning and hanging all Kashmiri youth who were involved in the pre-1990s revolt".


In a statement issued from London, JKLF president Azmat Khan, has said that we never had any doubts that Afzal Guru was innocent and he had no part in the 2001 attack on Indian parliament except that he was set up by IB and task force personnel to meet with one of the alleged attackers so that the Kashmiri movement could be defamed as a 'terrorist movement' and another Kashmiri could be hanged as a result.


JKLF president has said that learnt nothing form the hanging of Maqbool Butt in 1984, on 11th February. Every Kashmiri household produced a new Maqbool Butt to fight against Indian rule and they have now given a new martyr to our independence movement and our people will not forget this injustice for many years to come.  We will not let Afzal Guru's blood waste in vein.

JKLF in has organised a protest demonstration at the Indian High Commission in on Monday, 11th February, and will be holding a meeting with members of parliament to discuss this issue along with the demand for the return of mortal remains of Maqbool Butt and Afzal Guru on the evening.

JKLF chairman, Yasin Malik, who is currently on a private visit to , is sitting on a 24 hunger strike in to protest against the hanging of Afzal Guru, The JKLF supreme head Amanullah khan who is suffering from severe ill health is also on hungers strike in today to protest against Pakistani silence over the issue. 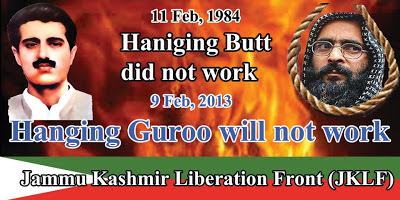 ()
Kashmiri pro-independence organization the Jammu Kashmir Liberation Front (JKLF) has called for a shutter-down protest in on the 29th Martyrdom anniversary of ’s independence leader, Maqbool Butt Shaheed. JKLF will take out a protest rally at Maqbool Butt’s birth place in Tregham, district Kupwara. Meanwhile, the UK chapter of the JKLF will hold a protest demonstration at the Indian High Commission in London 1pm – 3pm, when a parliamentary delegation of the All Party Parliamentary Group on Kashmir, led by its chair Lord Ahmed, will hand in a petition to the president of India to demand that Indian government should hand over the mortal remains of the Kashmiri leader to his family in Kashmir. The parliamentary petition has been signed by the following 33 Mps, Peers and MEPs.

A seminar on the life and legacy of Maqbool Butt Shaheed will be held in the House of Lords (Room 1) at to commemorate his 29th death anniversary. JKLF Zonal president, Mr Azmat A. Khan and other Kashmiri leaders, Peers and Members of UK Parliament are expected to speak at the seminar to highlight world apathy towards the issue of and debate the deteriorating human rights situation in occupied .

Note for press: The petition will be handed in to the Indian High Commission, Aldwych, at . Those wanting to attend the seminar will need to arrive 1 hour early to obtain entry clearance to the Houses of Parliament.