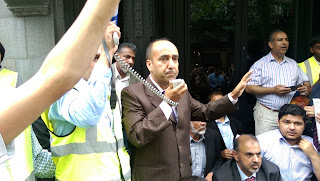 London 18 July: I would like to Thank all political, social and religious groups who have  participated in protest coordinated by JKLF UK zone in front of Indian High commission London on Sunday 17th of July 2016 and showed their solidarity with suppressed and oppressed  kasmiri nation.

They have raised their voices against human rights violations , and recent killings in Indian occupied Jammu Kashmir and supported the indegenious freedom movement of People of Jammu Kashmir .