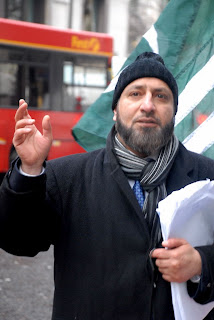 Cllr Mahmood Hussain of London Borough of Waltham Forest & Snr Vice President of JKLF in has condemned the desecration of Holy Quran and killings of protestors in Ramban area of Jammu Kashmir.

Peaceful Protest in Ramban took place after the Indian paramilitary force (BSF) entered into a local mosque, beating up the people who had gathered to offer prayers including the Imaam and desecrated the holy Quran. If this was not enough, other day, the same paramilitary forces killed 6 protestors and injured over 40 who were protesting peacefully about the events unfolded.

In a statement issued from , Cllr Hussain said that at one hand, portrays itself as a biggest democracy in the world, on the other hand is involved in gross human human rights violations. He said that even the places of worship are not safe and people are not being allowed to hold peaceful protests or assemble.

Cllr Mahmood Hussain said that there is no credibility in the probes conducted by the so far. Hundreds of enquiries have been launched over the decades, but not single armed forces personnel have been prosecuted during this time.  He said that JKL demands an International investigation by a credible world organization for providing justice in the recent massacre at Ramban and also for all the crimes perpetrated by the Indian state actors in last 23 years.

Cllr Mahmood Hussain has written to Amnesty International and UK Foreign Office to intervene and press to put an end the fresh killing spree in occupied territory.