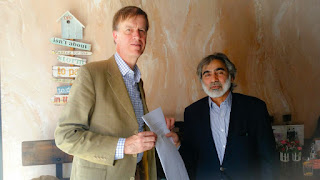 (London, 8 May 2018) Members of Jammu Kashmir Liberation Front's  Diplomatic Bureau, comprising  of  its head Prof  Zafar Khan, Mr Mahmoud Hussain and Mr Tariq Sharif, met  with British Parliamentarian Mr Stephen Timms, and discussed  with him at length on the need for a just and a peaceful resolution of  the Kashmir issue based on the fundamental rights of the people.
Mr Timms was briefed by the Diplomatic Bureau members   on the current situation, both inside Indian occupied Jammu Kashmir and across the ceasefire line that forcibly divides the state between India and Pakistan.
The diplomatic Bureau functionaries conveyed their serious concerns at the unabated militarised violence against civilian population by the Indian military forces that results in many deaths and injuries of innocent people on daily basis. The senior British parliamentarian who served as a minister  in both, Blair and Brown Labour Administrations, was also apprised of a culture of impunity that  prevails  in Indian occupied Jammu Kashmir which is supported  by  draconian laws such  as  the Armed Forces Special Powers Act -AFSPA - and Public Safety Act -PSA -that shield the heinous acts of militarised oppression perpetrated by the Indian forces; and to prevent death and destruction the  Indian military must not come into contact with the civilian population, and must withdraw from the urban and rural areas, particularly in the Valley of  Indian occupied Jammu Kashmir.
Mr Timms was briefed on the suppression of peaceful political dissent by Indian authorities through, the denial of fundamental democratic rights, including those of free speech and assembly. And despite claiming to be  the biggest democracy in the world, India confines the  Kashmiris' Joint  Resistance Leadership  comprising of the JKLF Chairman Mr Yasin Malik,  and  leaders of the APHC , Syed Ali Shah Gilani and Mirwaiz Umar Farooq,  constantly either  under house arrest or in custody.
The JKLF functionaries informed Mr Timms of the ongoing serious situation across the ceasefire line, and proposed that to ensure safety of the civilian population from death and destruction on daily basis, the Indian and Pakistani forces must disengage along the so called Line of Control-LoC- by withdrawing up to 10 kilometers from their current positions.
Mr Timms assured the JKLF leaders that he would engage with the British Foreign Secretary on the Kashmir issue, and agreed with them that as a world power, and with a permanent seat on the UN Security Council, the United Kingdom should play an effective, and proactive role over the Kashmir issue. Mr Timms assured the members of the Diplomatic Bureau of continuing to work with the JKLF on matters related with the Kashmir issue.
The Diplomatic Bureau members  passed on to Mr Timms  some of the recent correspondences written by it on  the need for a just and peaceful settlement of the Kashmir issue as well as on the  current situation,  to the British Prime minister, the  UN Commissioner on Human Rights, and the Secretary General of the Commonwealth.