COMMITMENTS OF INDIA & PAKISTAN ON INDEPENDENCE OF KASHMIR

COMMITMENTS OF INDIA & PAKISTAN
ON INDEPENDENCE OF KASHMIR 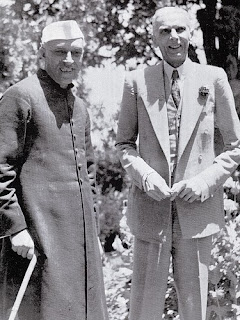 Quid-e-Azam Mohammad Ali Jinnah (The Founder of Pakistan)
“…with the termination of paramount, Indian states would be free to join either the Hindustan Constituent Assembly or the Pakistan Constituent Assembly or to remain independent…"
(Policy Statement issued June 16, 1947)
“……The second question that is engaging the attention of the Muslims of Kashmir is whether Kashmir is going to join the Constituent Assembly of Pakistan. I have already made it clear more than once that the Indian states are free to join either the Pakistan Constituent Assembly or the Hindustan Constituent Assembly or to remain independent………”
Press Statement July 11, 1947
“….. .The legal position is that with the lapse of paramountcy on the transfer of power by the British, all Indian States would automatically regain their full sovereignty and independent status. They are, therefore, free to join either of the two Dominions or to remain independent….”
Press Statement July 30, 1947
Pundit Jawaharlal Nehru (The first Prime Minister of free India)
“Kashmir has been wrongly looked upon as a price for India or Pakistan. People seem to forget that Kashmir is not a commodity for sale or to be bartered. It has an individual existence and its people must be the final arbiters of their future……”
(Speech in All India Congress Committee on July 9, 1951)
INDIA'S COMMITMENT AT THE UN
“……Whether she (Kashmir) should withdraw from her accession to India and either accede to Pakistan or remain independent with a right to claim admission as a member of the United Nations ….. all this we have recognized to be a matter for unfettered decision by the people of Kashmir……”
(Declaration in the Security Council Jan. 15, 1948 by Indian Representative G. S. Ayangar)
Zulfiqar Ali Bhutto, former President of Pakistan
“…..History has shown us that no right of self determination can be achieved by proxy …….if the people of Jammu Kashmir want their independence, if they want to be liberated………, if they want to be free people in fraternity and friendship and comradeship with Pakistan, they will have to give the lead and we will be with them……no matter what the consequences....” (Speech in the National Assembly, July 14, 1972)
Mohammad Nawaz Sharif (Former Prime Minister of Pakistan)
“……..I make it very clear that, of course, the right of self-determination means that let the Kashmiris decide as to what they want. This right of self-determination if exercised by the Kashmiris, of course, they have every right to decide whether they want to join Pakistan, they want to be independent or they want to join India…..”
(Interview with BBC in Tehran: Broadcast 2010,2200, 2230 hrs PST on Feb. 18, 1992)
SOURCE::  http://jklfworld.org/kashmir_issue.html

Jabar Khan , a senior functionary of JKLF in Pakistan Passed Away