Report By: Israr Khan| Luton
Youm-e-Ashura, 10th of Muharram, Shahadat-e-Imam Hussain (AS) conference held in Jamia Islamia Ghousia Turst in Luton. The theme of the conference was to pay honour to the sacrifices rendered by Hazrat Imam Hussain (RA) and other martyrs.
Every year on 10th of Muharram Jamia Islamia Ghousia Turst Luton remembers the day of Ashura as a major religious commemoration of Martyrdom at Karbala of Hussain (AS).
The Event was presided by Pir syed Ghulam Nizam-ud-dean Jami of Golra Shreef, speaking to a large crowd at Jamia Islamia Ghousia,
stated: "Mankind will remain indebted to Hazrat Imam Hussain (RA) for his supreme sacrifice in the path of truth & justice".
In his message to commemorate Ashura, senior Islamic Scholar and director of Trust Allama Qazi Abdul Aziz Chishti said the martyrdom of grandson of Prophet Muhammad (PBUH) was a glorious example of sacrifice, and a symbol of steadfastness against oppression.
Young scholar sahibzada zia ul mustafa said Karbala is a "zaoor of sifaat" a rain of patience. He listed down two lessons from Imam Hussain (RA) and his companions at Karbala. He added that an excellent example of Patience when Imam Hussain RA hold his son Ali Asghar RA and blood was pouring in his hands and he accepted the Raza of Allah. And secondly, in the rain of arrows half of companions were fighting and other half were praying Namaz.
Lastly, In allamia of conference said that the real teachings of Islam are to stand firm in the face of evil without any favour or fear. 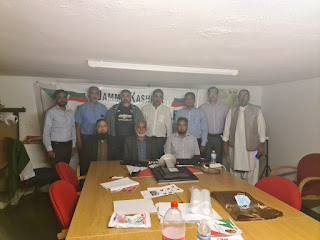