Subject: To seek an urgent meeting with H.E Pakistan High Commissioner in the UK, on Pakistan government’s intention to change status of  Gilgit Baltistan by making the region a province of Pakistan.

Dear Excellency, an All Party Conference-APC- of Kashmiri leaders was convened in Luton on 15 January 2016, to address the serious implications of Gilgit Baltistan’s integration into the Federation of Pakistan. It was resolved by the APC that a delegation of Kashmiri leaders should meet with your Excellency to convey the concerns of the leadership to the government of Pakistan.

The APC resolved that Gilgit Baltistan was an indivisible, historic and constitutional part of Jammu Kashmir, and as such change of its status will not be acceptable.

The APC resolved that, integration of Gilgit Baltistan into the Federation of Pakistan, will be a violation of the constitution of Pakistan and a clear contravention of all the UN resolutions on the Kashmir dispute….. The APC resolved that until the final resolution of the Kashmir dispute, the following course of action should be adopted as an interim solution:

a)      Either Gilgit Baltistan and Azad Jammu Kashmir-AJK- are merged together to form a national government of the two regions of Pakistan administered Kashmir:

b)     Or Gilgit Baltistan is allowed to form similar political structures of government and governance as currently exist in AJK.

The APC further resolved that Gilgit Baltistan and AJK must be allowed to control all their natural and economic resources.

The APC has deputed me to request for an earliest possible date for the delegation to meet with you, on this pressing national matter. Your Excellency’s kind and favourable consideration will be greatly appreciated.

London branch of Jammu Kashmir Liberation Front  (JKLF) has condemned the move by the Pakistani authorities to make Gilgit Baltistan as a constitutional province of Pakistan.

In a statement issued after the meeting of JKLF London Branch, it said that making Gilgit Baltistan as constitutional province of Pakistan will have serious consequences on the long standing issue of Jammu Kashmir dispute. Statement said that such move by Pakistan has no legal, political, official or moral justification whatsoever. By taking this illegal and unjust step, Kashmiris are being forced to consider Pakistan in par with India.

JKLF and people of Kashmir will strongly oppose and resist conspiracies   against the sacred cause of freedom and the fundamental rights of the people from all parts of forcibly divided state of Jammu Kashmir of which Gilgit-Baltistan is an integral part till the end.
The meeting was attended by President of JKLF London Branch Sanawar Hussain, General Secretary Mahmood Faiz, Mahmood Hussain, Javaid Rashid, Tariq Sharif, Nazakat Ali, Iftikhar Sharif, Usman Sharif and other office bearers of JKLF London branch. 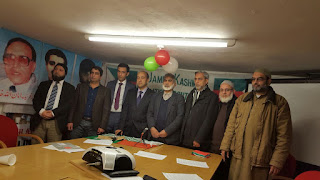 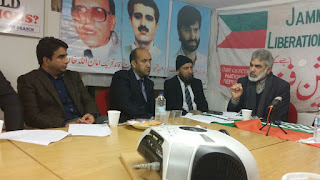