JKLF participated in protest organized by Sikh community in London

JKLF in participated in a huge protests organized by Sikh community in . Thousands of people participated who were protesting against the death sentence of Devinder Singh Bhullar. JKLF delegation which included Javaid Rashid, Tariq Sharif, Mahmood Faiz and Sanawar Hussain also took part in the protest and showed solidarity with the oppressed people of Khalistan.

While speaking to a television channel on this occasion, President of JKLF London Branch Mahmood Faiz said that is carrying out judicial murder of political activists who oppose their rule. 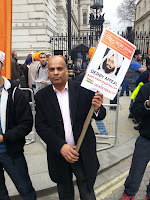 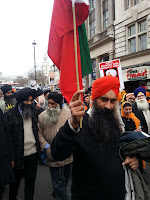 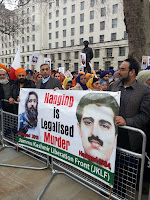 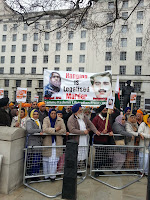 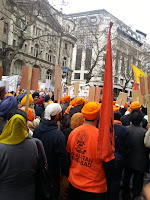 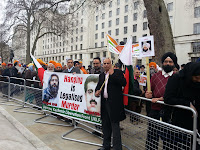 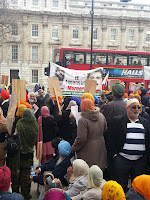 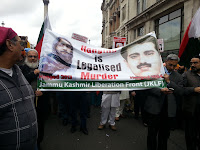 Chairman, Jammu Kashmir Liberation Front (JKLF), Mohammad Yasin Malik was Monday, released from his continuous house arrest since he arrived from Pakistan in the month of March. A JKLF spokesman said.“Malik was house arrested on March10, and was released today. Police that had laid a siege at his residence since 5 weeks was removed and Yasin Malik was set free,” the spokesman said.
He added that during this period Yasin Malik was confined to a small room and his health also deteriorated.According to the spokesman, JKLF chairman will address a press conference on April 16, at 2 PM. 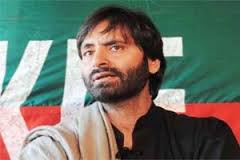 SRINAGAR (Press Release)
Reign of terror unleashed in Kashmir is condemnable.Imprisonment of youth, slapping PSA on them is an act of putting their future in dark and hence pushing kashmiri’s to the wall. This was stated by the chairman JKLF Mohammad Yasin Malik while condemning the recent arrests of youth and slapping of PSA on them. Yasin Malik who himself is under house arrest from last one month and has been confined to one room ,said that the young Kashmiri’s most of whom are students are continuously being targeted and tortured by police and other forces. Police is pro actively raiding, arresting and searching for these innocent Kashmiri’s. This has caused a wide spread fear psychosis among the youth throughout Kashmir. Yasin Malik said that this oppression ,suppressing people through police and military might is a clear evidence of Jammu Kashmir being a police state run by police and forces. Yasin Malik said that the so called civilian government is actually playing as puppets of forces and their only job is to provide a legal cover for the crimes and acts of terror committed by these forces .Yasin Malik said that today hundreds of innocent youth including under age kids are being put behind bars through black law PSA. Innocent Aasif Majeed Shaksaaz of Hazratbal who is just 16 has been sent to jail by this act. Same has been done with Aadil Ashraf khanof Sopore, Zubair Ahmad Taray and Shakir Ahmad Mir of Shupian, Sajad Ahmad of Khanyaar etc. hundreds of others including Junaid Ahmad Wani Khawaja bazaar,Sahil Ahmad Chonka Roshan Gar Mohalla, Arooj Ahamd Bhat Srinagar, Aadil Ahmad Dar Zainakot and Dawood Ahamd of Jamia Masjid Srinagarremain in jails, and police stations while has many are being hunted for by police. Yasin Malik said that even hundreds have been released but only after paying heavy ransom. What is the crime of these young kashmiri’s. Why are they being tortured? Why are rulers playing with their future and under which moraland human law is they being constantly ill treated, asked Yasin Malik. He said that Indian government, its Kashmiri puppets are responsible for the plight of these young children but at the same time the world especially those who persuaded Kashmiri’s to adhere to the principles of non violence, who preachpeace, on violence, democracy and humanity are also equally responsible as they silently watching the reign of terror being unleashed to crush a non violent movement by Indian rulers are not even ushering a word against this unilateral state terrorism. Yasin Malik said that if the civilized world, human rights groups,civil society especially working in India and other people who believe in democracy and freedom failed to rise up to the occasion’ new generation in Kashmir will lost every faith in humanity, justice and democracy. Yasin Maliksaid that the people of Jammu Kashmir are engaged in a peaceful movement .We are fighting a nation that has unleashed reign of terror on us and that too in the name of democracy and peace and it is the moral and human duty of every democratic country and people who believe in democracy and human rights to come to the rescue of this poor nation, Said Yasin Malik.
Meanwhile JKLF has paid rich tributes to martyr Sajad Ahmad shah of Shergadi .Terming him as one of the great son of soil JKLF leaders prayed for his soul. JKLF also paid tributes to Mohammad Jamal Lone Karhama who died recently.
Also JKLF vice chairman advocate Bashir Ahmad Bhat has expressed his heart felt grief and sorrow over the demise of a young kashmiri student kabir Rashid Bhat of Wadipora kupwara who died in Pune Maharashtra .
ENDS

JKLF Stages sit in for solidarity with prisoners

JKLF Press Release (from Maqbool Manzil, Srinagar)
Prisoners are the precious treasure of kashmiri’s and every kashmri’s is at the back of these hero’s…Advocate Bashir Ahmad Bhat. 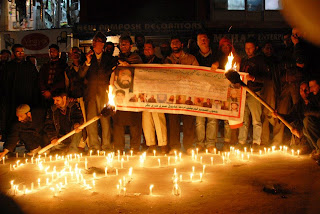 JKLF organizes a Protest sit in at Madina chowk as a show of solidarity with prisoners…. Spree of arrests and continues house arrest of JKLF Chairman Mohammad Yasin Malik strongly condemned….. SRINAGAR//Prisoners are the hero’s of kashmiri people and every kashmri’ is at the back of these hero’s. This was stated by the vice chairman JKLF advocate Bashir Ahmad Bhat while addressing the participants of a protest sit in at Madina Chowk Srinagar today. The candle lit protest sit in was organized by JKLF in solidarity with prisoners of Jammu Kashmir languishing in different jails especially the lifers. The protest that was announced by JKLF earlier’ started from Maqbool Manzil Srinagar as hundreds marched towards the Madina Chowk. The participants were chanting slogans in favor of Azadi, prisoners, martyrs and against judicial torture policy of India. At Madina Chowk the participants led by JKLF leader advocate Bashir Ahmad Bhat and others sat down on the road and protested against the ill treatment of kashmiri prisoners especially lifers .Many JKLF leaders including JKLF (h) leader Javed Ahmad Mir, Muslim conference leader Shabir Ahmad Dar and human rights worker Mohammad Ahsan unto were present in the sit-in . Many candles and Torch’s were illuminated on the occasion .Speaking on the occasion advocate Bashir Ahmad Bhat said that today through this protest we are raising our voice against the oppression and reign of terror unleashed against the kashmiri’s ,torture policy of India against kashmiri prisoners, sentencing kashmiri’s prisoners for life and other harsh sentences . We assure our brothers languishing in jails that every kashmiri stands by you and we salute your sacrifices and struggle. Bhat sahib said that Indian government has started a new Oppression "judicial torture" policy to suppress the ongoing freedom struggle in Jammu Kashmir .people of Jammu Kashmir reject this new "judicial torture" policy and express their full support and solidarity Prisoners sentenced to life including JKLF leader Sheikh Nazir Ahmad(Batamaloo), Shaukat Ahmad Khan, Dr. Mohammad Qasim faktu, Javed Ahmed Khan, Mohammad Ayub Mir, Mohammad Ayub Dar, Ghulam Qadir Bhat, Mohammad Shafi Khan, Raj din Khan, Shabir Ahmad Malik, Mohammad Amin Dar, Noor Mohammad Tantry, Feroz Ahmad Bhat, Parvez Ahmed Mir, Sheikh Samiullah and Ali Mohammad Sheikh (brothers), Mohammad Iqbal Jan, Mushtaq Ahmed kaloo, Mohammad Amin Wani, Mahmoud topi walla , Javed Ahmed Wani, Shabir Ahmad Najar , Gulzar Ahmad Wani, Mohammad Ishaq Paul, Fayaz Ahmad and Mohammad Saeed Bhat etc. Bhat sahib said that today we also strongly protest against the illegal confinement and house arrest of JKLF chairman Mohammad Yasin Malik who has been confined to one room from last one month and whose health is fast deteriorating and house arrest of syed ali geelani and mirwaiz umar farooq. Yasin sahib was today taken to hospital in police custody where his medical tests were taken. Bhat sahib strongly condemned the reign of terror and spree of arrests in valley and said that leaders like Shabir Ahmad Shah, Showkat Ahmad Bakhshi, Javed Ahmad Bhat (Pulwama),M Ashraf Sehrai and others still remain in illegal and undemocratic imprisonment. Bhat sahib also condemned the imprisonment of Akbar Ayaz whose wife is seriously ill and termed his continued imprisonment as condemnable. Bhat sahib also condemned the arrest of thousands of young students and youth and slapping of PSA on Zubair Ahmad and Shakir Ahmad of Shupian. After the peaceful sit in people in large numbers marched back towards the JKLF headquarters. The participants of protest rally chanted slogans against state terrorism and illegal house arrest of chairman JKLF Mohammad Yasin Malik.