Following is a transcript of JKLF press conference, held in London on 27th September 2016. Ladies and gentlemen you will be aware that while world media attention has been focused on Syria and elsewhere, India’s onslaught on Kashmiri civilians has reached all heights. Today is the 81st day of continuous curfew and killings in Kashmir valley and parts of Jammu region, restricting freedom of movement and freedom of speech by use of brutal and lethal force against unarmed civilians who refuse to accept Indian rule in Kashmir. 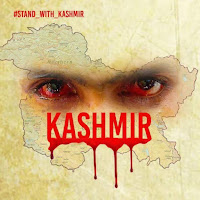 Srinagar 06th Sep: Cold blooded murder of another young Kashmiri at Seer Hamadan Islamabad by Indian pellet terrorism has again exposed the real face of brutality and inhumanness. This has proved that the proclamation of Indian home minister about stopping the use of pellet guns was only a hoax. The loss of two more young Kashmiris within less than 20 hours is heartbreaking and unbearable. For how long will international community silently watch this murder of humanity in Kashmir?

This was stated by the vice chairman of Jammu Kashmir liberation front (JKLF) advocate Bashir Ahmad Butt while condemning the ongoing spree of death and destruction at the hands of Indian trigger happy forces in Kashmir Valley. Paying rich tributes to Sopore martyr who breathed his last on 5th September 2016 in a Srinagar hospital and young man from seer Hamadan Islamabad who was martyred by pellets today morning, JKLF vice chairman said that hardly after 20 hours of Indian home ministers proclamation on halting pellets in Kashmir, his trigger happy forces gunned down another Kashmiri by same pellets thus proving the proclamation as only a hoax and eye wash to deceive public opinion. Butt Sahib said that before killing this young man in morning at seer Hamadan Indian forces were on rampage during night hours and vandalized scores of houses, vehicles and orchards in the area. He said that Kashmiris are losing their loved ones by bullets, pellets, shells, beatings and tortures and within 60 days we have lost 80 of our young boys, girls and children at the hands of Indian occupational forces but international community resting in deep slumber has failed even to hear the cries , shrieks and wailings of Kashmiris . Butt sahib said that more than 8000 Kashmiris have been injured during last 60 days with more than 600 losing or being at the verge of losing their eyesight but no one seems to care. He said that this criminal and callous approach of the international community merely for safeguarding its trade relations with India is blot on the face of humanity and democracy. 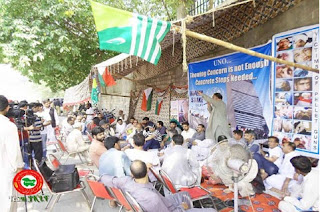