Statement for Press & Media on the meeting with the British Foreign and Commonwealth Office-FCO- officials  by a delegation of  Jammu Kashmir Liberation Front’s diplomatic Bureau:
London - 26 February 2018:

9 February 2018
Kashmiri nation awaits Maqbool Butt’s return to the Homeland. His mortal remains must be released by government of India.

At home and in the diaspora, on 11 February every year, people of Jammu Kashmir mark the day, as a day of resolve and affirmation of their right to freedom, and independence in reunified Jammu Kashmir.  This is the day when Kashmiris demand that government of India releases mortal remains of Muhammad Maqbool Butt, and hands them over to his family, and his nation. Since his judicial murder by the Indian government on 11 February 1984, Maqbool Butt’s mortal remains are buried in a corner of the notorious Tihar Jail in India.
Indian government with its usual obduracy, and intransigence on all issues relating to the future status of Jammu Kashmir, refuses to release Maqbool Butt’s body, despite repeated demands for its return to his homeland. Over the years successive Indian governments have consistently, and in a blatantly callous manner, refused to release the mortal remains, either to his family, or in the care of his party-the Jammu Kashmir Liberation Front-JKLF-.
Since the day of his hanging, an empty grave awaits Maqbool Butt’s mortal remains, to be interned at the Martyrs’ cemetery in Srinagar, with the respect and dignity that befits a valiant son of the soil, whom the Kashmiris regard, across both sides of the ceasefire line, as the father of their nation. Maqbool Butt is a national hero, and his martyrdom is a symbol and epitome of peoples’ struggle, to become masters of their destiny in a reunified Jammu Kashmir that is cohesive, prosperous and at peace with itself, and its neighbours. Maqbool Butt was a strong advocate of the sovereign rights of his compatriots over their own country’s destiny, and did not accept either Indian, or Pakistani claims on his nation’s political destiny.
Maqbool Butt has become a symbol of resistance, and an inspirational icon to his people, especially the young, who long to see their homeland freed and reunited, as envisaged by their martyred leader. Demand for the return of Maqbool Butt’s mortal remains will continue, as well as the demand and the struggle for which, he was judicially murdered by a country’s government that has reneged on all the solemn pledges, it made before the international community on the Kashmiris’ right to freedom.
India also refuses to release mortal remains of Afzal Guru, whom the Indian government hanged on trumped up charges in February 2013. This clearly shows India’s tyrannical policies towards Kashmir, and an utter disregard for the civil and political rights of Kashmiris. Undoubtedly Indian government follows a vindictive, oppressive and colonialist paradigm, to reinforce its political hegemony, and occupation of Jammu Kashmir by continued imprisonment of Maqbool Butt and Afzal Guru even in death!
This in reality, is the true face of Indian democracy, which on 34th martyrdom anniversary of the most illustrious son of the soil, Kashmiris at home and abroad will continue to expose, as they do today, on this 11th day of February 2018, from Srinagar to Muzaffarabad, and from London to Brussels, North America and in many other cities of the world. Rallies, vigils, seminars and public gatherings held on this day, are a testimony  of the expression of solidarity, and determination, by the Kashmiris with Maqbool Butt’s struggle and sacrifice, and Maqbool Butt’s right as the father of the nation, and Afzal Guru  to be buried in their homeland-Kashmir. 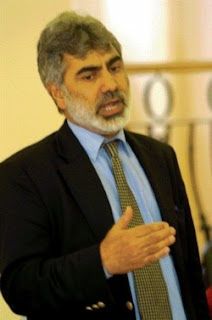 JKLF- condemns killing of civilians across the ceasefire Line, and in Indian held Jammu Kashmir.

London (5 February 2018)
The JKLF has strongly condemned the ongoing firing and shelling across the ceasefire line between the Indian and Pakistani forces in Jammu Kashmir, and violent suppression of political dissent by Indian forces in Indian held part of the forcibly divided country. In a statement issued by the head of JKLF’s Diplomatic Bureau   from London today, the JKLF has called on the United Nations to ensure safety of civilians both inside Indian held Jammu Kashmir, and along both sides of the ceasefire line as a priority, through strengthening the role of its UNMOGIP contingent in the region. The JKLF has called on the UN to institute urgent measures to demilitarise the ceasefire line and demand assurances from the opposing armies for safety of civilians in the border areas.
The statement also took a strong note of the continuing deaths of innocent civilians in Shopian and elsewhere in the Valley of Kashmir at the hands of the Indian army. And termed the current situation intolerable, and unbecoming of a civilised world when civilians are deliberately targeted by a professional army, whether in Shopian, Pulwama, Kupwara, Handwara, Bandipur in Indian held Jammu Kashmir, or in Jagalpar Kuiratta, Nykyal, Poonch, Neelam valley or indeed many parts of Pakistan administered Jammu Kashmir. The only result of such military actions is death and injury to innocent civilians of all ages. The international community has a moral and legal responsibility to censure those responsible for causing misery, death and desolation to innocent lives.
The JKLF statement pointed out that for seventy years, India and Pakistan are locked in conflict over their claims and counter claims on Jammu Kashmir. Both countries have fought full scale wars, and daily exchanges of fire by their armies along the almost five hundred miles long cease-fire line, makes it absolutely impossible for tens of thousands of civilians, to lead a normal existence. Many lives are destroyed through death and destruction. Children whose parents put them to bed at night are found dead in the mornings with bullets and bomb shrapnels pierced through their tiny bodies. This carnage of innocent lives takes place because Indian and Pakistani armies are deployed eyeball to eyeball along the ceasefire line.
The JKLF statement added that the Indo-Pakistan confrontation causes immense suffering and miseries for people on both sides with nothing in sight by way of redress and justice. The entrenched positions of both countries have rendered 20 million forcibly divided people invisible, which is nothing less than a tragedy of epic proportions for Jammu Kashmir- a country- as big as Great Britain in size. Indian and Pakistani military presence in Jammu Kashmir is a constant physical and psychological threat, and danger to the safety and wellbeing of the people. Their presence is also an impediment to peace in the region and the world as both countries are nuclear powers.
The JKLF statement concluded by exhorting the United Nations to take urgent actions to disengage Indian and Pakistani military forces from the civilian population not only on the borders across both sides of the ceasefire line, but also force Indian military into cantonments. The JKLF urged the United Nations to appoint a special rapporteur to investigate the many violations of basic human rights of the people of Jammu Kashmir.  The statement called on the international community to persuade India and Pakistan to provide unhindered access to the international and local media to report freely on the current situation on the ceasefire line.
Zafar Khan:  Head of Diplomatic Bureau, Jammu Kashmir Liberation Front –JKLF-
London Secretariat:                       119-123 (Basement North) Cannon Street Road, London E1 2LX
Email:                                    info@jklf.co.uk 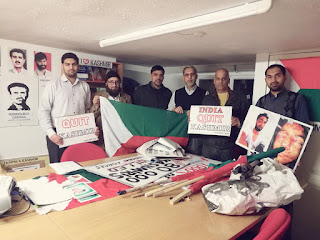 A meeting of JKLF London Branch was held in connection of 11 February preparations. JKLF London Branch will participate in large numbers in a protest outside Indian High Commission in London. During this meeting, senior leader of JKLF in UK Mahmood Hussain struggle and martyrdom of Maqbool Butt is a glorious chapter of our history that will always guide us through the tough journey of freedom struggle.

11 February is being commemorated as Maqbool Bhat’s martyrdom anniversary. On this day Kashmiris all across the world remember their hero with honour and pride. Maqbool But was hanged by India in Tihar jail on 11 February 1984 and his body was never given to Kashmiris for the burial.
Secretary InformationJKLF (London Branch)
Newer Posts Older Posts
Subscribe to: Posts (Atom)