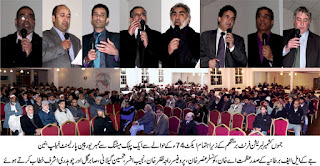 JKLF President, Azmat A Khan, addressing a public meeting organized by the  branch has said that JKLF was set to change the history of and the map of Indian sub-continent just as JKLF struggle has changed the history of independence movement in Jammu Kashmir. He urged the UK Kashmiris to unite on one platform and strengthen the JKLF movement. He said that a number of major projects are underway by  JKLF at diplomatic level and for that his organisation was in dire need of funds and asked his members to donate generously as they had been doing for nearly 3 decades. He said that JKLF leaders will not allow the Kashmiri martyrs blood waste in vain. He further said that both and are intendeing to declare LOC as a international border which will not be acceptable to Kashmiris on both sides and if their voice was not heard their movement would take a dangerous turn and all responsibility will lie with those who are not listening to our peaceful protests.

European MP, Phil Bennion, who was a Chief Guest at the JKLF’s annual gathering said that Kashmir issue needed to be resolved for the better relations and peace between India and Pakistan and that a sustainable solution was to give Kashmiri people in all occupied areas a chance to decide their future through a internationally supervised referendum.

Other speakers who spoke for UK Kashmiris  included JKLF general secretary Tehseen Gillani, Sabir Gull, Professor Zafar khan, Choudhary Ashraf khan, Masoom Ansari, Najib Afsar, Mumtaz Mirza and Councillor Ansar ali. Their main focus  was the demand that international community should come forward and help the Kashmiris to achieve their right of self determination. Many speakers condemned the Act 74 of AJK government, which they said was an instrument of slavery for the nation and stated that  Gilgit baltistan was integral part of Jammu Kashmir so Pakistan should not try to unitlaterally declare it as its province, which would not only violate the United Nation resolutions on Kashmir but also give India an execuse to do the same for Ladakh and Jammu  They speakers urged  Pakistan government not to back stab the Kashmiri movement.  They warned that  Pakistani attempts to declare provincial status for Gilgit Baltistan would backfire and , JKLF and allies will launch a worldwide movement across the world against .
Before this Public meeting JKLF Birmingham Branch election was held and Choudhry Ashraf khan was elected as President and Javid Iqbal as General Secretary. Other office bearers are Raja Tika Khan, Adnan Ali Butt, Qayum Ansari, Waseem Ansari, Nazakat Bhatti, Younis Ansari, Aurangzaib Mirza, Shoiab Janjua. All the newly elected members took oath and said that they will carry on working for the Independence of Kashmir and betterment of Kashmiris. 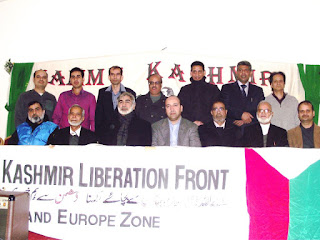 ():
’s premier pro-independence party, Jammu Kashmir Liberation Front (JKLF) today launched a parliamentary petition to be signed by members of Commons and Lords during an All Party Parliamentary Group on meeting in last night. At a meeting chaired by Lord Ahmed, who himself originates from Kashmir, many Kashmir related issues including the issue of Kashmir’s unmarked mass graves, forced disappearances and extra-judicial killings and imprisonment of minors as well as the constitutional issue of Azad Kashmir including Pakistan’s annexation of Gilgit-Baltistan territories were debated. It was decide that the APPG would support the move to launch a parliamentary petition to be sent to the President of India to ask for the return of mortal remains of Kashmiri independence leader, Maqbool Butt, who was hanged in Tihar jail in 1984 and buried inside the jail premises. Indian government has been refusing to return his mortal remains for burial in for all these years. A JKLF delegation led by its president in , Azmat A Khan, gave a briefing at the high level meeting of members of parliament on several issues and asked for the group to take up action points. The members of the All Party Parliamentary Kashmir group who signed the petition during the meeting include, Lord Ahmed, Lord Qurban Hussain (a former leader of JKLF), Sir Gerald Kaufman MP (Manchester Gorton), David Ward MP (), Debbie Abrahams MP (), Gavin Shuker MP (), Lady Sarah Ludworth (MEP). Another 6 MPs added their names to the petition later overnight.

A JKLF briefing paper was presented at the meeting, where members of two international NGOs and other official observers and researchers were present and took part in discussions as to how to move forward with the conflict resolution in Kashmir and bring about international political pressure on both India and Pakistan to honor their pledged for self-determination in Jammu-Kashmir, which has been pending for 65 years. JKLF president Azmat Khan and vice president London Cllr Mehmood Husssain stressed to the group that appropriate action in both houses of parliament and with relevant ministers was pertinent on the issues of human rights. The APP group decided to re-double its efforts in seeking permission to take a fact-finding mission to . The JKLF briefing paper quoted several international reports which highlighted the mass scale abuses of human rights in Indian Held Kashmir and urged government to ban Indian security personnel from entering who were accused of involvement in atrocities in Jammu Kashmir.

JKLF delegation also raised concerns with constitutional issues in Azad Kashmir assembly elections where pro-independence candidates are barred from contesting elections and also demanded that Pakistani government should halt its program of illegally annexing Gilgit-Baltistan. The issue of Kashmiri ethnic identity in was also raised in the meeting. 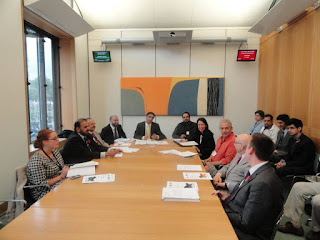 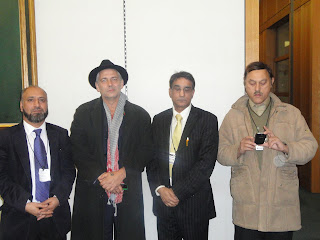