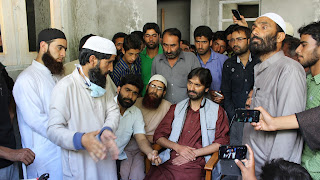 Srinagar, 25th JULY 2015: Chairman JKLF Muhammad Yasin Malik has expressed his regret and anguish over the plight of victims of recent cloud burst at Kulan Gund Ganderbal which killed four people and destroyed about 4 dozen residential houses and thus has devastated dozens of families .
While distributing relief among the victims of the cloud burst, Yasin Malik said, that providing relief to these affected brothers is our moral and religious duty.
Yasin Malik today along with a delegation comprising of zonal president Noor Muhammad kalwal, zonal senior vice president Muhammad Yasin Butt,Zonal organizer Bashir Ahmad Kashmiri, district president Ganderbal Bashir Ahmad Rather (Boya) ,district president Srinagar Showkat Ahmad Dar and others visited Kulan Ganderbal early today and met with the bereaved families of those who lost their lives due to cloud burst and also those who lost their residential houses due to the natural calamity. Yasin Malik along with other leaders visited and met the affected families and distributed cash relief, food items, warm blankets, polythene and thermo cool sheets and other necessary relief items among them.
While praying for the four people who lost their lives due to the cloud burst and also expressing solidarity with those who lost their houses and belongings, Yasin Malik said that JKLF will do everything possible for these victims. He said that stopping natural calamity is not in our hands but reaching out to the affected people, providing them necessary relief and trying to uplift them is our religious, national and moral duty.
Yasin sahib was told that after the cloud burst, it is only local youth and elders who voluntarily helped the affected people. People said that So-called government has only provided some kilograms of rice to the affected and has done nothing without this till date.  The magnitude of the natural calamity was such that besides devastating more than 40 residential houses, it totally wiped out the local graveyard.  On the occasion JKLF chairman appealed locals and wealthy people to support these victims of natural calamity. He said that providing relief and help to victims of natural calamities is a religious duty which we all should try to fulfill .He also appreciated the local volunteers who have been relentlessly providing help to the affected people.
Meanwhile Yasin Malik has expressed his grief over the recent cloudburst at Baltal in which many have lost their lives and many more are missing. Expressing solidarity with the bereaved and affected families, Yasin Malik expressed regrets on the natural calamity.
Meanwhile JKLF has expressed its grief and sorrow over the sad demise of mother of Bashir Ahmad Parray (Tehsil president JKLF Homshalibugh). District president JKLF Kulgam Abdul Sattar along with Nazir Ahmad and Gulzar ahmad participated in the funeral prayers and burial of the deceased lady. JKLF expresses its grief and sorrow over the sad demise of this mother and prays for her heavenly abode.
Ends