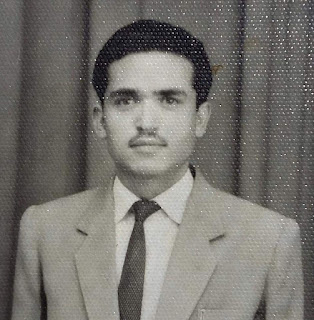 Supreme Head JKLF, Jinab Amanullah Khan was born in 1931 in Astore, Gilgit. He did his primary schooling in district Kupwara and later did Matric in its Tehsil Handwara incf IHK where he was living with his sister.

He stood first in Matric exams amongst the Muslim students in IHK and got scholarship for further studies is S P College and Amar Sing College where from he was once arrested and later was again issued an arrest warrant on the pretext of holding demonstrations against India and the maharaja in 1952.

In order to evade arrest, he went for hiding and crossed over to Pakistan / AJK via Sialkot through Jammu along with a family who happen to be the relatives of KH Khursheed, former President of AJK. Punjab govt did not recognise the certificates of IHK, therefore In the continuation of higher studies he got admission in Peshawar University and later in Karachi in 1953 where from he did his masters in journalism followed by LLB.

He was elected as the general secretary of Students Federation in Karachi and continued his political activities for the freedom and independence of Jammu Kashmir.

He formed Kashmir Independence Kashmir in 1957 and could gather only 25 people across JK at that time to confront and challenge 'give and take' policy of Pakistan led by Gen. Ayub Khan with India on Kashmir. He along with other colleagues formed JK Plebicite Front and was elected its first Secretary General in its first ever convention whose office bearers took oath at Sucheetgar near LOC in early 60's.

In Karach he continued his studies and worked too to fulfil his needs. He later managed to establish his own school in Karachi which proved his only earning source till his last breath. He went to UK in early 70's where from he started his activities for Kashmir. Besides many protests and activities, he led a team of 4 youngsters who held a protest inside the UN General Assembly Hall in late 1970's when Indian PM stood up to address the august gathering.

He formed JKLF in 1977 in UK and returned back in 1983. After the Mahatre, an Indian diplomat who was kidnapped and later killed by some young kasmiri's who demanded Maqbool Butt's release, in UK he was arrested there on the behest of India through Interpol in 1985.

He was operated upon while being in custody in UK for 15 months when he was diagnosed with lungs cancer and his 3/4th part of it was removed in 1986. He is the pioneer of current freedom struggle in IHK that started in 1987 with the inception of militancy under the banner of JKLF led by him.

He is man who challenged the Indian rule in IHK and continued the political struggle of Independent Kashmir in AJK as well. He formed a govt in exile in 1990 with its head. On his call many big pro freedom rallies in both the sides of JK State were held that included crossing of CFL in 11 Feb. 1992 via Chakoti, Muzaffarabad AJK. He managed to form an organisation that has its basis in every province of JK across the CFL.

He believed in oneness of the State of JK and rejected any out of box solution based on the division of the State. He reunited JKLF in 2012 that had underwent division in 1994 and expressed his fullest of faith in Yasin Malik as its leader and Chairman. He wrote dozens of pamphlets, booklets and books on Kashmir and to promote the ideology of Independent Kashmir that included Juhd-e-Musalsal with three editions.

He presented his Kashmir case at different local, regional and international fora's and got overwhelming response from world around. He was a pious, dedicated, nationalist and selfless leader and founder of this freedom struggle.

He campaigned in Gilgit this year from 20th January to 3rd March against announcing Gilgit Baltistan (GB) a province of Pakistan. During this campaign he met and convinced a cross section of political parties that included the CM and Governor of GB.

During this tour he got lungs and chest infection for which he was admitted in Shifa International Hospital, Islamabad where the doctors diagnosed Pneumonia and cronic pulmonary disease. He was discharged from hospital on 14th of April after he got stable.

Just 5 days ago he was again hospitalised in Hearts International Hospital in Saddar Rawalpindi after he complained some breathlessness. He was very conscious, alert and could recognise everyone who would pay a visit to him until his last moment but was not able to talk much because doctors had once again diagnosed pneumonia.

He after taking breakfast today early morning breathed his last at about 08:30. His nimaz-e-jinaza will be offered tomorrow at 11:00 am in Liaqat Bagh, Rawalpindi and soon after jinaza he will be taken to Gilgit for burial to fulfil his last wish.

He has made this wish with the intention that his tomb may prove a bond between GB with the rest of the divided parts of the State of JK especially with AJK and IHK.

He was married in 1974  in Parishing, Astore, Gilgit. Along with the thousands of his well wishers, he left behind his only daughter Asma Khan and his widow.

(I am writing this note while I am in terrible mourning and apologise for any mistake).
Newer Post Older Post