Participants call on the British Government and the international community to play a constructive and meaningful role in resolving the Kashmir issue. 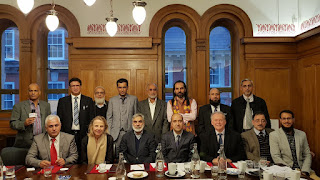 London 24 October 2017: Speakers at the seminar organised by Diplomatic Bureau of the Jammu Kashmir Liberation Front-JKLF- in London’s Central Westminster Hall acknowledged, that for seventy years India and Pakistan have failed to resolve the issue of Jammu Kashmir’s future status. The participants agreed that dialogue and the recognition of the rights of 20 million people of Jammu Kashmir was the only wayward for a solution of the long standing Kashmir conflict.

Head of the JKLF’s Diplomatic Bureau Professor Zafar Khan welcomed the participants and said that the fundamental right of 20 million people to freedom across the divided Jammu Kashmir, has been ignored and neglected by the world community. This is a grievous injustice inflicted upon a people who long for peace, dignity and reunification of their country. He said his party and leadership has always wished for the entire state to become a bridge of peace in South Asia, and Kashmiris want their country  in the region to be at peace with itself and in harmony across its borders. Referring to the message of his Party Chairman Mr Muhammad Yasin Malik, Zafar Khan said that the pain of a subjugated nation and its people, is clearly visible from Mr Malik’s message. He said that the Indo- Pakistan dimensions over the Kashmir issue however, have rendered the entire nation diplomatically invisible. And this is the injustice and indignity beyond any measure of morality that should stare the international community in the face.

In a message especially sent for the seminar from Srinagar, Mr Muhammed Yasin Malik the Chairman of the JKLF told the participants that “Jammu Kashmir is burning and its people are going through an unabated trauma and agony for many decades, and that twenty million Kashmiris are living in a life of total instability, brutal agony and distress”. He went on to impress upon the participants that “our land has been illegally occupied by military might and we are being denied our democratic right of self-determination which is guaranteed to us even by the United Nations”.

The JKLF Chairman reminded the participants that despite wars between India and Pakistan, over a dozen UNSC resolutions, and bilateral agreements, India and Pakistan have patently failed to make any progress on the all-important political status of Jammu Kashmir. He lamented at the “criminal silence” of the international community, and in particular pointed at the USA, the UK and the European Union who have turned a blind eye on the plight of Kashmiris, which encouraged India to deny the right of Kashmiris to freedom.

The JKLF Chairman regretted that India unleashed an extreme militarised violent response to our decision to transform our armed struggle to a peaceful movement. India however  responded by unleashing an unprecedented militarised aggression against our people since 2008, which the Indian military and paramilitary forces continue with impunity resulting in deaths of hundreds and injuries inflicted on thousands as well as huge destruction of property and crops. He said “it is quite clear that India wants to silence us with its military might, and it intends to force us into submission with its huge military deployment in our country”. The JKLF Chairman however, reiterated that as a nation we will not surrender before the naked Indian military and state fascism. The JKLF Chairman conveyed to the participants that as part and parcel of human civilisation, and part of international community, we will never bow in submission and give up our birth right to freedom, and declared that the resistance will continue for liberty freedom and dignity.

The writer and historian Ms Victoria Schofield, who has authored four books on Jammu Kashmir, said that she has been associated with Kashmir for over thirty years, and spoke of differing narratives on the issue of Kashmir which needed to be understood. She said India and Pakistan were not prepared to give up territories of Jammu Kashmir that each occupied. She said that the international community was supine over Kashmir in the face of Indian and Pakistani positions. Victoria Schofield emphasised that the period of 1947 to 1949 in Jammu Kashmir’s history was crucial and emphasised that if Pakistan forces had withdrawn in the territory they controlled in Kashmir, this would have not given India the excuse to refuse the UN proposed plebiscite on Kashmir.

The veteran Kashmiri origin member of the British upper House of Parliament Lord Nazir Ahmed said that all the options including, the option of an independent Jammu Kashmir was a matter for the 20 million people of Kashmir, as their basic right. He said our priority is Kashmir and its people and not India and Pakistan. He said war was not and has never been a solution, and the British Peer proposed an international conference for a peaceful solution of the issue. He said as basic stakeholders Kashmiris from across both sides of the ceasefire line must be enabled to participate in the proposed conference.

While Mr Chris Leslie MP, the Chairman of All Party Parliamentary Group on Kashmir, said that it was important to take stock of the current situation in Kashmir. He said he would organise a meeting in December to engage with those with personal experiences and their testimonies on the situation. He pointed out that a calmer atmosphere and scenario needed to be espoused in the conflict. He said he would organise a delegation to visit both sides of Jammu Kashmir. Mr Chris Leslie feared that in view of trade possibilities with India, Brexit could prove detrimental in steering the British government towards an active position on the Kashmir issue.

Mr Gavin Shuker MP pointed out that the international community should not only be influenced about India and Pakistan in relation to Kashmir issue. Mr Shuker said that the conflict over Kashmir was an issue of justice for the people of Kashmir, and that Kashmiri voice must be heard as the voice of the Kashmiris was sacrosanct in this conflict. Mr Gavin Shuker MP said that he would like to see that all parts of Kashmir across the ceasefire line were accessible to the international press. He expressed the view that a rational cross party parliamentary approach in the British Parliament on Kashmir was essential.

Dr Dibyesh Anand, Professor of international politics at the University of Westminster in London, argued in his presentation that even those on the political left of the Indian polity do not acknowledge and recognise the right of Kashmiris to exist as a free and independent nation. Professor Anand argued that Kashmiris’ resistance to the Indian state as a result, is met with full force of the Indian state. He said that it was important to mobilise against human rights violations in Jammu Kashmir alongside the struggle for the right of self-determination, as a means to engage with people not only in India but elsewhere on the Kashmir issue. He said Indian state’s attempts to dialogue with Kashmiris is always based on the premise that Kashmir is an integral part of India. And the appointment of India’s current interlocutor in Kashmir according to Prof Anand, is an example of this Indian approach or the mind-set. He said it is the mandarins in Delhi who make the policy on Kashmir. He argued that Pakistani state would have a similar aggressive attitude if Kashmiris were agitating as forcefully against its rule as they are in Indian administered Kashmir. However Professor Anand pointed out that Pakistan could let Azad Jammu Kashmir become azad (free) and turn the region into a model of positive political development with a democratic constitution. Professor Anand pointed out that azadi does not mean only political freedom, but it should mean justice for all. He pointed out that he supported the JKLF’s position on the rights of minorities and diverse opinions in Jammu Kashmir.

Kashmiri origin British Peer Lord Qurban Hussain argued that Pakistan recognises Kashmir as a dispute, whereas India considers it as its internal affair. He said that India is not willing to listen on Kashmir. Lord Qurban Hussain pointed out that Kashmiris have not given up on their right to freedom. He said that there can be no peace without a resolution of the Kashmir issue, and said that there should be simultaneous withdrawal of Indian and Pakistani military from Kashmir.

Mr Graham Wilson Chairman of Nations without States in his address argued that a scientific approach needs to be adopted on resistance and against oppression. He said that the UN in Kashmir has failed because of the US influence. He pointed out that the occupation of Kashmir should be resisted through people’s power. He said if Scotland can be allowed by the UK to have a referendum on independence, the people of Jammu Kashmir should be allowed to exercise their right to self-determination too.

Mr Ershad Malik Europe Spokesman for the Jammu and Kashmir Democratic Party said that there is no peace in Kashmir, and only the Kashmiris feel the pain of the oppression. He reminded the participants that Kashmiris gave up the gun but there has not been a positive response to the people. He pointed out that as a parent organisation of the freedom struggle, JKLF and the people of Kashmir should be prepared for a long struggle.

At the end of formal presentations members of the JKLF and other invited guest joined in the discussion on various aspects of the Kashmir issue that were raised in the seminar. Members of JKLF’s diplomatic council Mr Tanvir Chaudhry ( President Europe Zone) from Finland, Sardar Nasim Iqbal from Belgium, Mr Sabir Gul ( President UK zone ) and Syed Tehsin Gilani ( Gen Sec of UK zone), and members of JKLF’s Diplomatic Bureau Mr Mahmoud Hussain, Mr Tariq Sharif, as well as the veteran JKLF leader Mr Latif Malik took part in the discussion. Mahmoud Faiz, Sanawar Hussain, Talat Butt from JKTV and representative of the Latvian Embassy, a number of parliamentary interns and students also attended the seminar.

Following resolutions were proposed and adopted by the participants

1…That the way forward for a peaceful and just solution of the long standing Kashmir issue can only be found through a meaningful dialogue between India, Pakistan and the Kashmiris; and that the international community, and in particular the United Kingdom, the USA, the European Union, and the UNSC must endeavour to facilitate, for a conducive diplomatic environment so that a meaningful dialogue process for a peaceful solution can begin.
2… In view of the increased and almost continuous exchanges of fire across the ceasefire-line in Jammu Kashmir between the Indian and Pakistani forces, and the heavy loss of life and property as well as general disruption caused to the daily routines of inhabitants on both sides of the ceasefire line, this meeting calls upon the governments of India and Pakistan to abide by the ceasefire agreement of 2003 between them with immediate effect. And calls upon the UNSC to empower the UNMGIP to enforce the ceasefire and report to the UNSC violations across the ceasefire-line.
3… The meeting calls upon the governments of India and Pakistan to speed up the process in documentation, and safeguard the safety and ensure the visits of separated families on both Indian and Pakistani held areas of the state of Jammu Kashmir to meet with greater frequency, safety and dignity.
The meeting calls upon the UNSC and especially the UK and the US to impress upon India and Pakistan to address the matter of family reunions in Kashmir on apriority humanitarian basis. 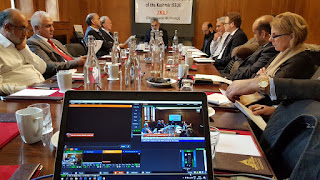 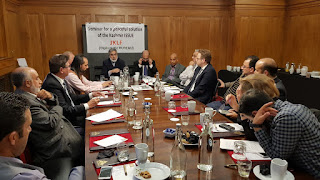