Protest in London against Fraud Election in Pakistan Administered Kashmir 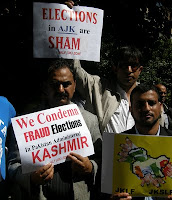 ‎JKLF Protest in London against Fraud Election in Pakistan Administered Kashmir. The protest took place in front of Pakistani High Commission, London. Kashmiri people from other many towns including Luton, Sheffield, Slough, Bedford, and Nottingham also attended. A petition was also handed over to the officials of Pakistan High Commission condemning the involvement of Pakistani political parties in the disputed region and Act 1974.  Below is the memorandum


His Excellency Wajid Shams-ul- Hassan
Pakistan’s High Commissioner to the UK
Lowndes Square, London
Date:
Dear Excellency
Re:              The Assembly Elections in Azad Jammu -AJK- today and the
Azad Jammu Interim Constitution Act 1974.
As your Excellency is are aware, elections for the AJK Legislative Assembly are taking place today in which the Jammu Kashmir Liberation Front-JKLF-  decided not to participate.
Notwithstanding the excitement generated during the election campaign by the presence of Pakistan Prime Minister Syed Yousaf Raza Gilani, and Mian Nawaz Sharif the leader of the opposition, the JKLF considers these elections under the 1974 Interim constitution Act as unrepresentative, as it imposes unjust and undemocratic conditions and restrictions on the question of state’s accession.
Excellency our party has, during the past month mounted a vigorous political campaign in both AJK and elsewhere, to mobilise public opinion and create awareness about the undemocratic governance in AJK due to the imposition of the 1974 Interim Constitution. On AJK by .
As in London today, the JKLF is  holding rallies and vigils across AJK and in other parts of the world to express Kashmiris’ rejection of the 1974 Act, and the undemocratic and unrepresentative structures of governance that have  developed   under this constitution.
AJK- assembly elections- purport to be a democratic expression of not only over 3 million residents of the territory, but also elect members for constituencies that  since 1947 remain within the Indian occupied part of the state... The AJK assembly also styles itself as the successor of the pre August 1947 government of the state of .
The 1974 Act requires candidates wishing to contest elections for the AJK assembly to swear an oath of allegiance to the “cause of accession of the state of to ”, (S) 21 (6) and (S) 23 (1). This requirement of the 1974 Act is a clear contradiction and contravention of the basic political, inherent and inalienable right of the people of AJK, and of the entire state of for an unfettered choice to have a democratic and representative government.
Therefore continued application and exercise of the 1974 Act hardly reflects any democratic credibility and representativeness in the governance of Azad Jammu and .
Excellency during the past almost sixty four years, it is for the unfettered choice that the people of have struggled in order to achieve the right for a free and democratic vote! It is indeed this very principle upon which the inherent and inalienable right of around 20 million people of Jammu Kashmir is predicated towards their just struggle for self determination.
Thus Kashmiris since 1947 have seized upon every available opportunity to resist political status quo in their country, and have campaigned for reunification and a sovereign right to decide on the political and constitutional status for their homeland as a just and equitable solution of the issue. Incidentally Kashmiris of all political persuasions do not consider the future of their homeland as a dispute between and but rather as an issue which is linked with their inherent and inalienable rights and aspirations.
As you are aware the Kashmir state comprises of a number of regions, which at presently include the Indian occupied part of Kashmir, the AJK  region  and   Gilgit Baltistan, which was  unilaterally declared as a province of Pakistan by the current Pakistani government   since it came to power in 2008.
In the Indian occupied part of , the assembly elections take place within the Indian constitution. This clearly disenfranchises the people who do not recognise Kashmir as part of India, hence the  popular  movement for self determination since 1988;  which is being violently suppressed by Indian forces of occupation  resulting in the deaths of  around  one hundred thousand  people.
While the struggle for reunification and self determination in relation to the entire forcibly divided state of Kashmir continues, we demand that the undemocratic 1974 Interim Act imposed on people of Azad Jammu and Kashmir, is rescinded and replaced with a transparent and  democratic constitution that fully accommodates and recognises the basic political and human rights  of all  shades of political and ideological  opinions,  including the  enfranchisement of  political forces that  advocate the cause of an independent and sovereign status  for a reunified state of Jammu and Kashmir.
The and was established on and reconstituted on as the successor Government representing   the entire state. If such a government is to have legitimacy of representing not just those within the physical boundaries of AJK, but across the Line of Control-LoC, it is only reasonable to expect that it is   fully democratic and sovereign.
That not only the Legislative assembly is elected under a democratic constitution, but also the undemocratic and colonial edifice of the Kashmir Council is constituted in accordance with   processes consistent with the principles and practices exercised by a sovereign people.
Otherwise your Excellency, the election process in AJK, taking place today, will once again prove to be a sham election, and a futile effort in the name of democracy. Such a sham process  will not only continue to   disenfranchise and alienate the people,  but will also be a  betrayal of the immense sacrifices that they and their forefathers have rendered to the cause of freedom and justice in Kashmir.
We urge your Excellency therefore to convey our views contained in this communication to the Government of Pakistan that it encourages and allows the people in AJK to formulate their own constitution so that a representative system of governance    which is fully compatible with internationally recognised democratic norms and principles is established without delay and duress.
With expectation,
Cllr Mahmood Hussain (President, JKLF UK Zone)
Syed Tehseen Gilani (General Secretary, JKLF UK Zone)
________________________________________
Jammu Kashmir Liberation Front (JKLF)
Email               jklfukzone@jklfworld.org
Web                http://www.jklfworld.org
Blog                 http://www.jklfworld.blogspot.com
Facebook        http://www.facebook.com/JKLFWORLD
Address:          18 Carlton Road, Luton, LU3 1ER 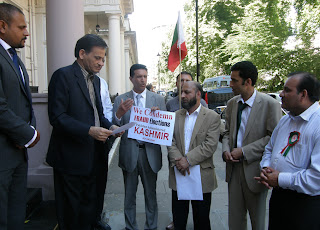 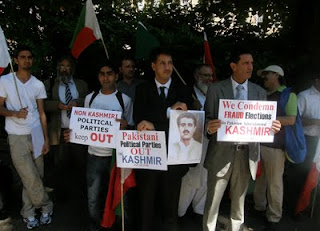 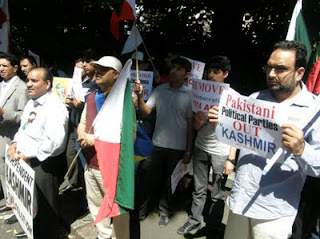